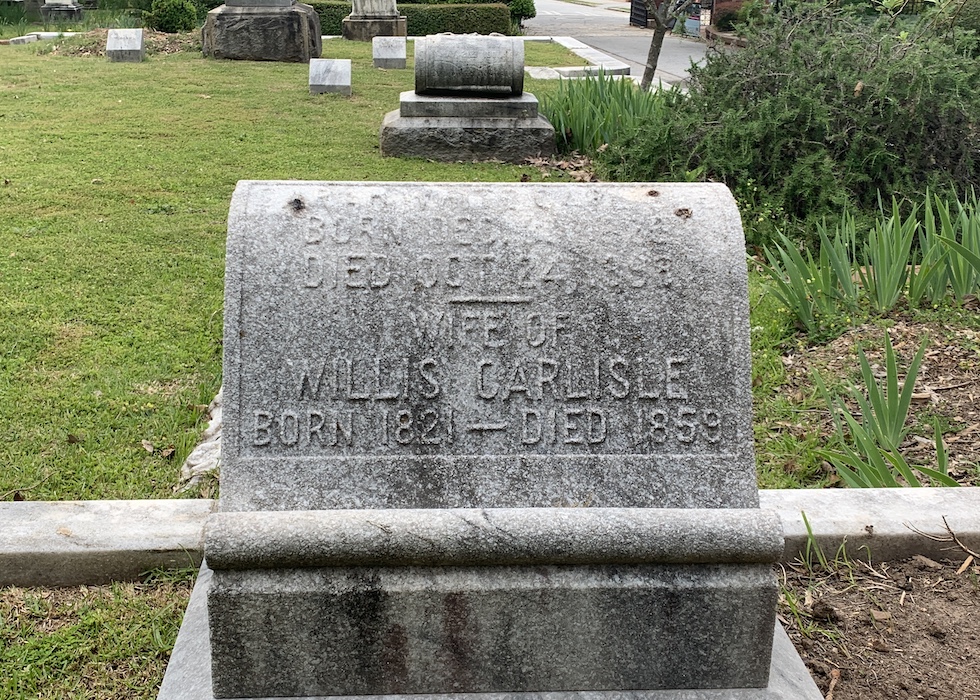 Sarah White Carlisle is often recognized as the “Mother of Atlanta.” Sarah was born in Marietta in 1825 and she married 21-year-old Willis Carlisle in 1841. On the advice of the preacher who married them, the young couple moved to Terminus, the rough and rowdy railroad settlement that became the city of Atlanta.

A friend secured the couple a house, but when they arrived, they found it full of people who refused to vacate. Alone in the wilderness, Sarah and Willis found an old shanty to spend the night. Before they could move in, they had to clear out the cattle that were living inside. This first day in Terminus must have been stressful for the couple, but was likely worse for Sarah, who was seven-months pregnant at the time.

The pair moved into a one-room cabin on Marietta Road, which served both as a home and the grocery store that Willis set up. Sarah traveled back to Marietta to give birth since there was no doctor in Terminus. She delivered a healthy daughter, Julia, in August 1842. Both mother and daughter returned to Terminus a few weeks later, and Julia Carlisle has the distinction of being the first white baby in Atlanta.

As matriarch of her family, Sarah supported her husband while he served as town marshal and raised their children. Sarah gave birth to six more children about Julia. Willis Carlisle died during a typhoid epidemic in 1859. Sarah Carlisle, the “Mother of Atlanta,” died in 1898 and was buried here at Oakland next to her husband.