Oakland’s tree canopy includes 1,600+ trees and hundreds of species. Some are saplings, while others are close to 200 years old. Unfortunately, since 1982, Oakland has experienced a 50% reduction in its tree canopy due to drought, environmental stresses, natural disasters like the 2008 tornado and old age. Professional care for all our trees, including soil therapy, fertilization, watering, pruning, lightning protection, and replacement, costs about $40,000 per year. Our goal is to raise one million dollars to provide for future care.

The 1,600+ trees at Oakland provide a foundation of natural beauty and tranquility and offer countless additional benefits that extend to the community beyond Oakland’s walls including shade, cooler temperatures, clean air, and habitat for wildlife and pollinators.

With over 5.6 million people living in metropolitan Atlanta, having a healthy tree canopy is critical to our health. Science shows that one large tree can supply enough oxygen for four people. Located less than a mile from downtown, Oakland Cemetery is one of the largest parks in the city. Named for the forest oaks that dominated the original six acres, Oakland now boasts 48 acres of history, sculpture, gardens, wildlife and an annual visitation of 55,000.

Oakland is the home to majestic oaks and grand southern magnolias. One of our cherry laurel trees is an Atlanta Champion Tree, the largest of its species in the city.

These living legacies are irreplaceable in our lifetime as are their connections to families from generations past. Many have their own story that traces back to a specific family grieving or honoring a loved one through the planting.

In 1885 Private Lucian Brahan Weakley planted a magnolia sport behind the grave of his brother to honor his brother’s death at Chickamauga. The 133-year-old southern magnolia is one of the largest in the city looming over the Confederate section of the cemetery, and Weakley’s tombstone still stands against its trunk.

To discover more stories visit, Oakland and its many trees. We have guided tree walks twice per year and are working on a self-guided tour of Oakland’s most significant and interesting trees. 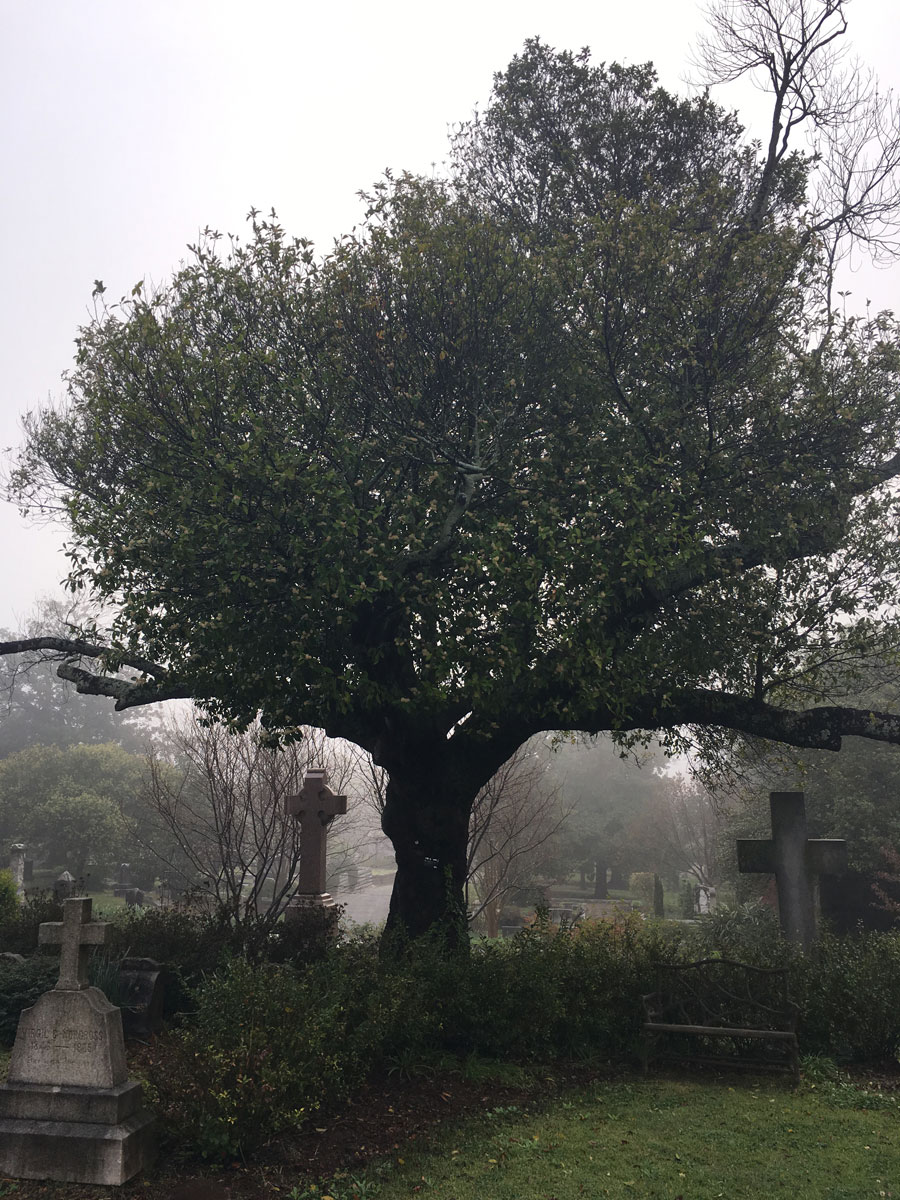 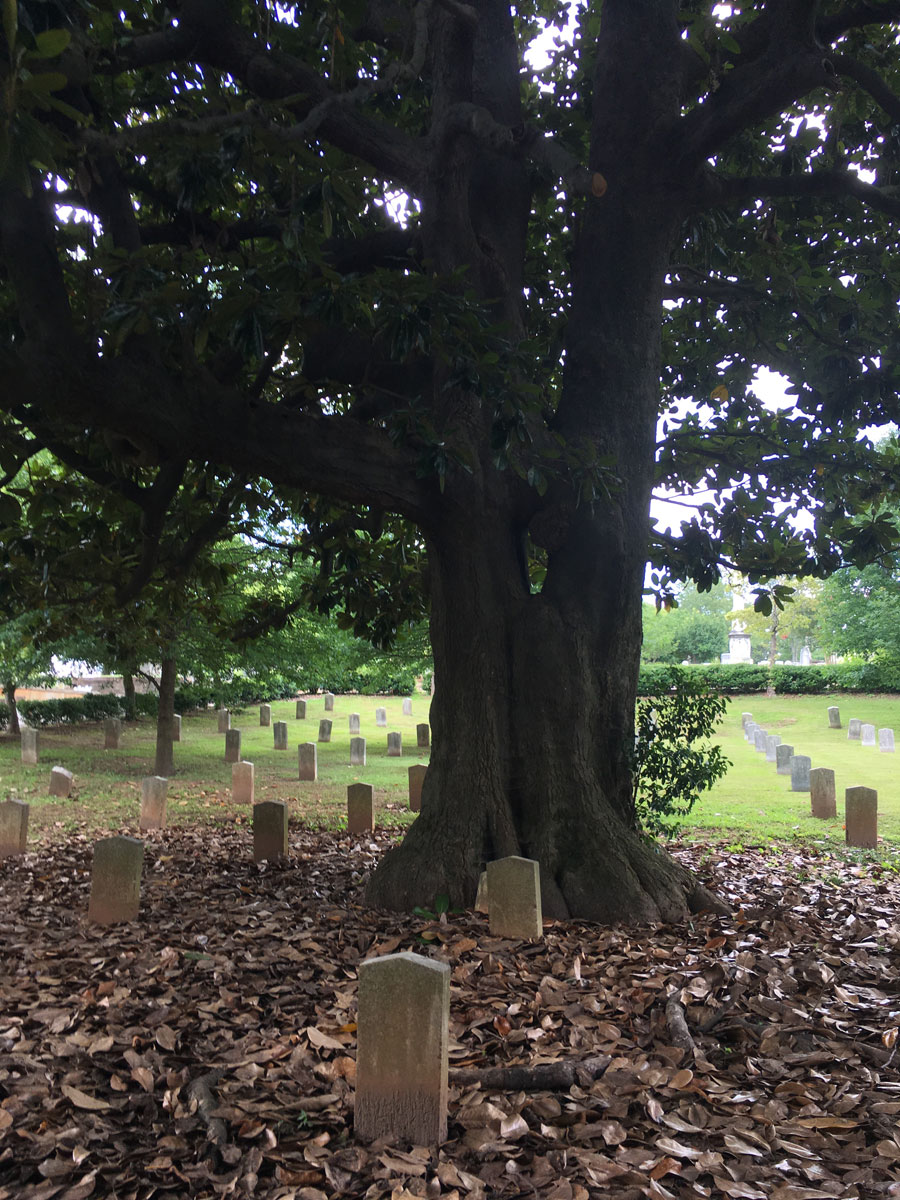 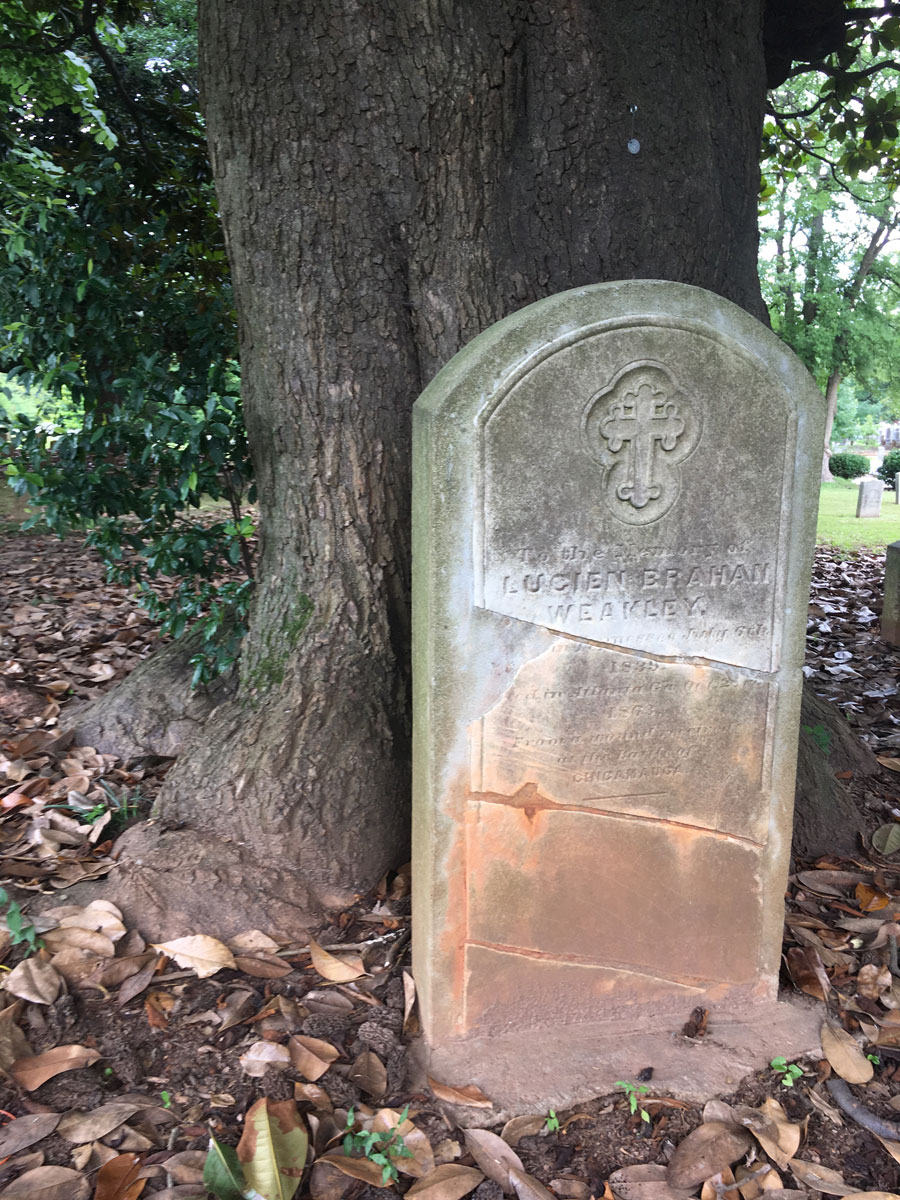 The Seed of Vision

Spence Rosenfeld (1952-2018), CEO and president of Arborguard Tree Specialists, as well as a former Oakland board member, created the first Tree Care Action Plan for Oakland in 2012 in response to earlier inventories and surveys that indicated that the canopy was in danger.

A survey of the canopy trees was conducted in 1983, and again in 2003. During that 20-year time span about half of the large trees had died and been removed. Then the 2008 tornado stuck after which numerous initiatives were implemented to more thoroughly analyze the tree canopy during which each tree was numbered, tagged, and located using GPS coordinates. The results strongly indicated that Oakland’s trees were not receiving the care they needed.

The 2012 Tree Care Action Plan outlined remedial procedures (pruning, soil therapy, lightning protection, etc.)  and preliminary budgets for specific tree-care zones throughout Oakland. Its findings and proposed action steps are the foundation of our $1 Million Tree Canopy Fund. The funds raised for the Tree Canopy Fund will help us continue to implement Spence’s vision and honor his memory.

Preserve and Protect Our Trees

While we will continue to plant new trees for future generations and to replace those that are lost, we must preserve and protect Oakland’s mature tree canopy now. If these critically needed maintenance procedures are not completed, the result will be a continued loss of the remaining canopy and legacy trees.

Donate to the Tree Canopy Fund
Back To Top