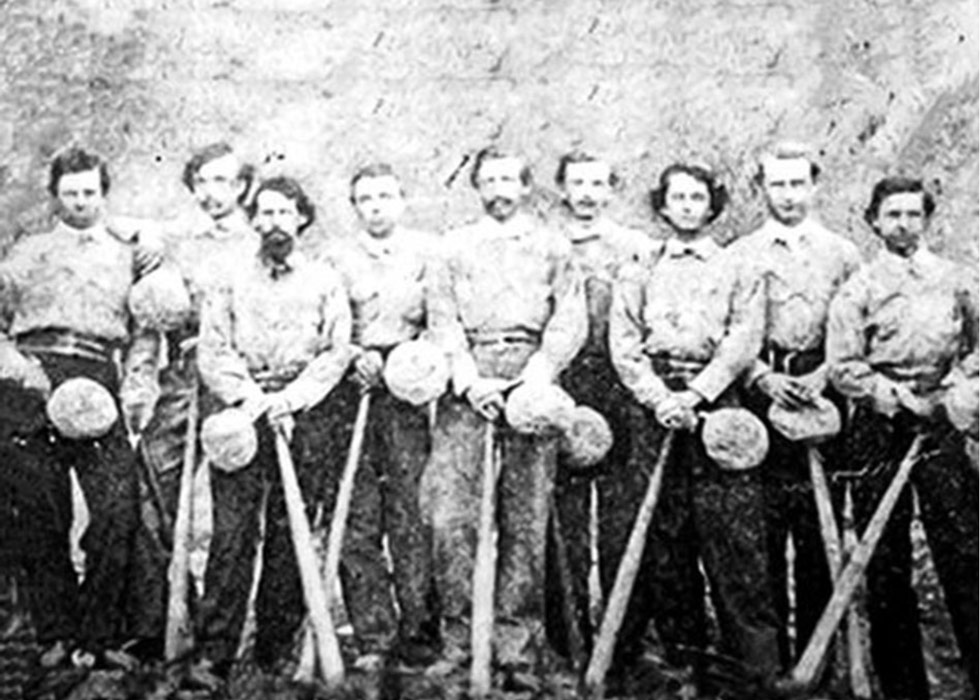 On a spring afternoon in 1866, a group of men gathered in a green field not far from the front gate of Oakland Cemetery. The devastated Atlanta skyline could be seen in the distance and red flags fluttered from homes of those suffering from an outbreak of smallpox that had swept through the city. The people of Atlanta desperately needed something to celebrate, and on May 12, 1866, it was baseball.

Hundreds of people gathered to watch the players of the Atlanta Baseball Club and the Gate City Nine play ball. There was no admission price, no concessions for sale, and no seventh-inning stretch to break up the 4.5-hour game. It was just two teams of men trying to outrun, outscore, and outplay one another. In the end, the Gate City Nine emerged victorious, and the Atlanta Baseball Club disbanded in shame. And that is the entire story of Atlanta’s first baseball game. Well, not quite…

Sam Downs (1825-1875) owned the Cabinet Saloon on Alabama Street and was regarded as one of the most honest members of the community. Respected by both teams, he was the ideal choice to serve as the umpire for Atlanta’s first baseball game. At 2 p.m. on May 12, Downs took his seat in a large armchair behind home plate and ordered the teams to “play ball.”

Robert “Bob” Dohme (1845-1904) took the field against the Atlanta Baseball Club and assumed his position as shortstop. Dohme had emigrated from Germany with his family in 1850 and settled in Danville, Kentucky. He joined the Union army when the Civil War broke out, and he learned to play baseball during the war. Dohme moved to Atlanta after the war and used his knowledge of the game to organize the Gate City Nine team. During the historic game, Dohme was hit in the abdomen by a fast ball. He turned pale and fell to the grass, causing several ladies in the crowd to faint. Dohme was later revived and the game continued. When his baseball days were over, Dohme opened a grocery and became a successful businessman.

A center fielder and first baseman for the Gate City Nine, John W. Collier (1846-1910) belonged to the illustrious Collier family. His father, John Collier, wrote the original charter for Atlanta and is considered a city founder. His brother, Charles Collier, served as mayor from 1897 to 1898 and helped to organize both the famous Piedmont Exposition of 1886 and the Cotton States and International Exposition of 1895. John Collier was raised in Atlanta and joined the Confederate army at age 16. He served as a courier for General Lucious Gartrell, another Oakland resident. Collier helped the Gate City Nine to victory, and later helped to cement his family’s legacy of civil service by working as an auditor in the city’s comptroller office. He died in 1910 and is buried in the Collier mausoleum.