skip to Main Content
Oakland's gates are open, but the Visitors Center and restrooms are closed due to the pandemic.  Learn more & plan your visit. 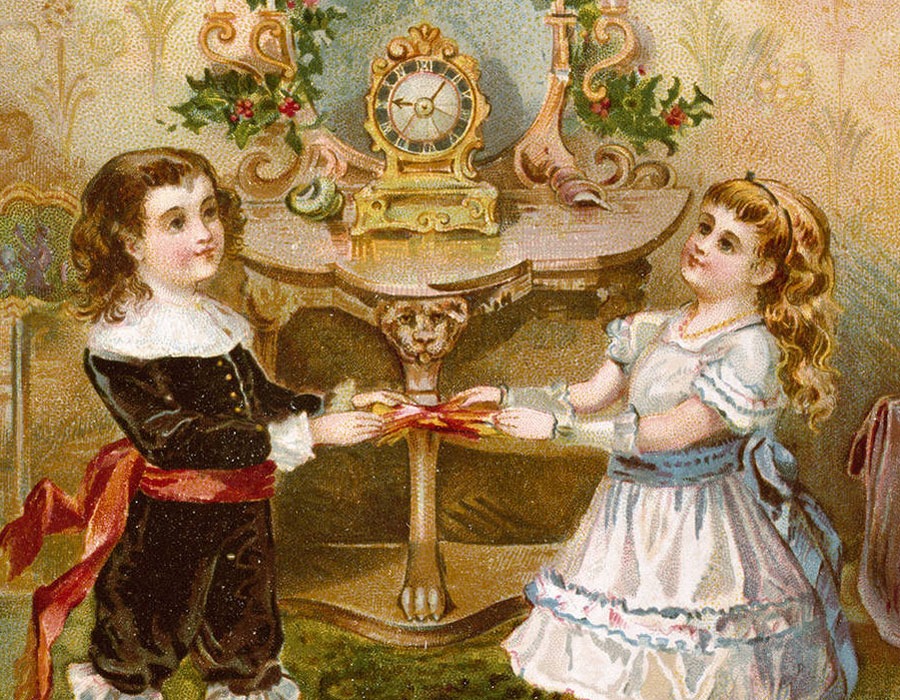 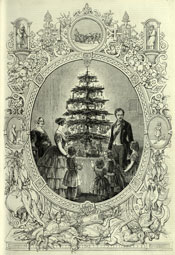 Prince Albert, Queen Victoria’s German-born husband, is credited with popularizing several holiday traditions in Great Britain, most notably the Christmas tree. In 1848, a drawing of the royal family celebrating around a Christmas tree was published in the Illustrated London News. Families across Britain sought to emulate the royal family, which corresponded with an increase of Christmas trees in homes. These trees were decorated with homemade decorations, candles, fruits, sweets, and had small gifts underneath it.

In 1853, the first advertisements for Christmas ornaments appeared. A fun, albeit somewhat obscure, decoration that appeared on the Victorian Christmas tree was a glass pickle. The ornament was often hidden in the tree and the finder of said pickle on Christmas day was either given a special gift or permitted to open their presents first. 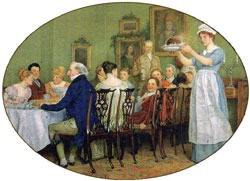 In 1843, artist Henry Cole was commissioned to design a Christmas card. The card was a little expensive for everyday Victorians, with a price of one shilling each, so it was not easily accessible. However, the idea behind it took off and children started designing and making their own Christmas cards. As technology improved and colored printing became more common, the cost of the cards decreased. This, in conjunction with cheap postage, caused the Christmas card industry to quickly expand. In 1880, 11.5 million cards were produced.

Christmas cards were not immediately loved by everyone. Some Christmas cards depicted holiday revelry and the consumption of alcohol, which alienated members of the temperance movement. Temperance advocates believed that it would encourage drunkenness. Other cards featured eerie images, such as clowns chasing policeman, gambling monkeys and even large killer wasps chasing children. But, overall, the images depicted on the cards focused on the Christmastide holiday.

The rise in mechanization and industrialization led to a new middle class with income to spend on mass-produced toys, decorations, and holiday novelty items. One such novelty item was the Christmas cracker. It is thought that the cracker was first invented in the 1840s after the creator, Tom Smith, was inspired after seeing bonbons (a sweet wrapped in paper) during a trip to Paris. Christmas crackers are wrapped tubes filled with small gifts and items, such as dolls, whistles, candy, and jewelry. The crackers became a staple in the 1860s. Children and adults loved the explosive “bang” when the cracker was pulled apart.

Food and drink were important to the holidays, especially wassail punch and roast goose. The recipe for the punch varied by family, but the common ingredients were often fresh nutmeg, cloves, lemon slices, cinnamon, and roasted crab apples. The punch was given to carolers as they went door-to-door and it was critical that punch is hot when served. The type of meat that was served by each family varied by socioeconomic status. The wealthy dined on beef and turkey, while those who could not afford such meats ate goose and oysters.

Victorian holiday traditions mainly revolved around the family, warmth, and charity, and that continues to this day.

Happy holidays to you and yours!

Sign up for our newsletter to stay up to date on stories, history tours, events, and preservation efforts.

U.S. News ranks us #7 in their best things to do in Atlanta list, and The Atlanta Journal-Constitution named us 2020's "Best free thing to do in Atlanta." Take a history tour. Attend an event. Explore on your own. Plan your visit today!