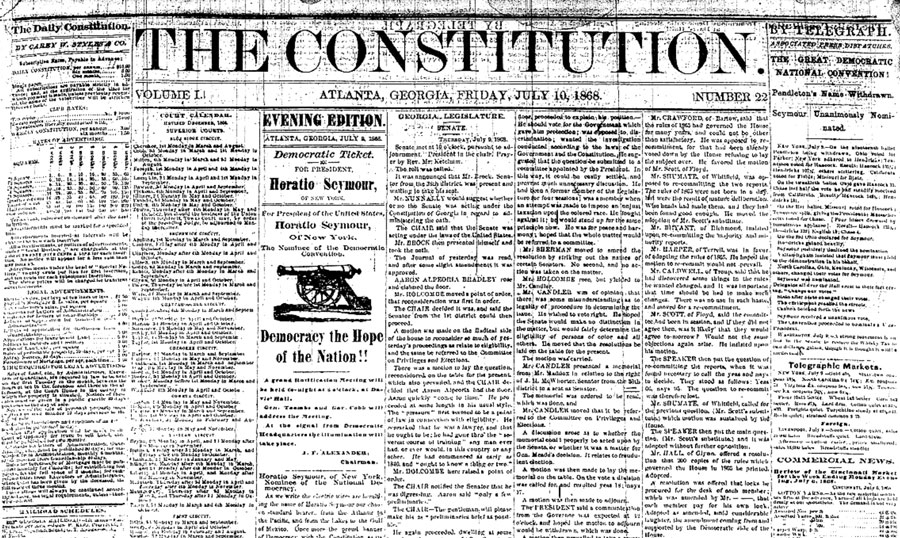 In honor of the 150th anniversary of the Atlanta Journal Constitution, enjoy this brief history of the paper’s founding by historian Larry Upthegrove:

In May of 1868, Col. Carey Wentworth Styles, while attending a convention of the Democratic political party in Atlanta, GA. discovered that the local Atlanta Daily Opinion, the Republican-leaning newspaper, could be bought. At 42, Styles was the founder and owner of the Albany News of Albany, Ga. He had tired of the small town and wanted to relocate to the bustling, growing, greater city, so he had made his paper available for purchase, without success so far.

While visiting in Atlanta, Styles became interested in buying the Atlanta Daily Opinion, but most of his money was tied up in the Albany paper. He convinced Atlanta businessman James H. Anderson (future silent-citizen of Historic Oakland) to joint-venture the endeavor. Anderson was willing to put up all the money required to purchase the “material, good will and business” of the Daily Opinion, providing that Styles buy half from him with funds gained from the sale of the Albany News. Styles was given six months to conclude his sale and secure his part of the ownership. Styles and Anderson would take over the paper in the middle of June.

Later in May, Styles made a trip to New York to purchase new type and other materials. On his way home, he stopped in Washington to visit with his friend, President Johnson, and congratulate him on the outcome of the trial in the Senate that defeated the Impeachment attempts of the Radical Republicans. It was reported that during a conversation between the two men, Johnson said that he thought it would be a good time for the title of a paper to be “Constitution”, because of the new constitutions emerging in the Southern States and changes in the US Constitution with amendments. Styles made plans to implement it as soon as he could take over the paper.

On June 16, 1868, the new paper, with new type, new owners, a new editor, a new manager, and a new name, published its first issue to subscribers of the Daily Opinion and the retail public. Styles printed, “We have the honor this morning to offer ‘The Constitution’ to the country as a candidate for public favor, and to bow ourselves, for the first time, into the arena of daily journalism.”

To help with the editing and writing duties, Col. Styles hired an Associate Editor of Scott’s Monthly Magazine, J.R. Barrick. Barrick had to assume all the writing duties in December when Styles had not sold his Albany paper and was unable to buy his interest in the Constitution. Upon the expiration of the six months, James Anderson put his son-in-law William Hemphill in charge, changing the name of the publishing company to W.A. Hemphill & Co. The young company flourished until Barrick died from consumption in April of 1869. He was buried right behind Atlanta’s first Mayor, Moses Formwalt’s, grave marker at Oakland Cemetery.

Next, another Confederate Colonel and future Oakland resident, Isaac Avery, stepped in to

handle the editorial duties of the fledgling paper. The young paper did very well, forcing the only other major paper in Atlanta, the Daily Intelligencer, out of business. Avery was in the editing office until early in 1870 when another future Oakland resident, Edward Y. Clarke, bought an interest in the paper and took over the editing. Avery, among other accomplishments, wrote The History of the State of Georgia from 1850 to 1881, published in 1881. Clarke was a part of the group for six years before selling his interest and his job to Evan Howell, son of Judge Clark Howell, also an Oakland resident.

William Hemphill held the job as part owner and business manager until 1901. He died the following year and was buried across the path and looking at, Capt. William A. Fuller.

Evan Howell, along with most of the staff following these founders, would be too young for old Oakland. Instead, that generation, congregating in death on the high hill of Westview Cemetery, are, Joel Chandler Harris, Frank Stanton, and Henry Grady, lying in their final resting places.

All the men in this report are long-time “Silent Citizens” of Historic Oakland Cemetery except for Carey Styles who died in Texas.