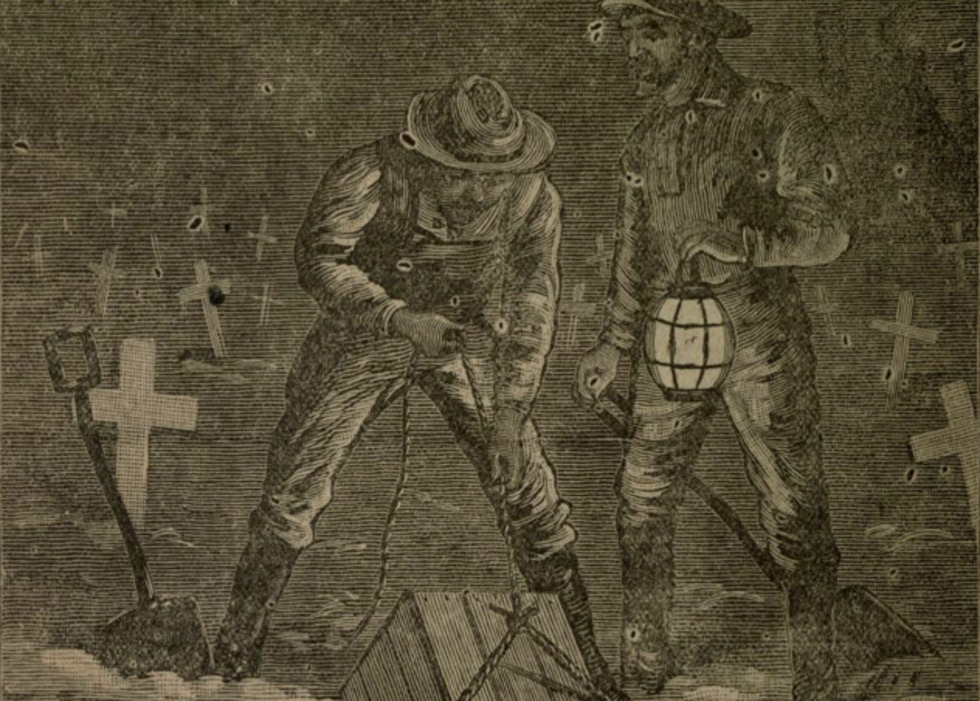 The only creatures in the cemetery at midnight were the occasional bird and two mysterious men. Determined to do their job without interruption, these men carried a large bag and shovel. The purpose of their visit was obvious: they were going to steal a body.

The scene above could have happened at any cemetery across the country in the 19th century. There was a growing need for professionally educated doctors and surgeons in the United States. Medical students needed to train, and dead bodies were the perfect tool to learn from before they operated on living people. But, unlike other European countries, America did not have laws granting unclaimed bodies to medical schools. The act of donating a body to science was rare, and the supply of corpses to dissect was limited.

The answer to this problem lay in cemeteries. The night after a funeral, grave robbers would steal the fresh corpse and sell it to a medical school. The heart of the grave-robbing industry in America was Baltimore, a city with several large medical schools. But grave robbing took place in almost every major urban area. The men who dug up the “stiffs” were commonly referred to as “ghouls” or “resurrectionists.” The advent of railroads made it easier to ship corpses across the country, and stiffs were often transported from city to city in barrels of alcohol.

Founded in 1854, the Atlanta Medical College was located at what is now Grady Hospital. Despite being home to a medical school, no mention of grave robbing in Atlanta can be found in newspapers until 1879. But that is not to say the school’s corpses did not frighten Atlantans. A September 1875 issue of the Thomaston Herald alleged that an old well located near the school was filled with corpses. A nearby resident complained of an “offensive odor” in the neighborhood, and an investigation revealed the smell was from the well. It was described as “a ghastly sight, such as [sic] one as is not pleasant to think about, much less behold.”

In 1878, the Southern Medical College was established on Edgewood Avenue as a rival to the Atlanta Medical College. A year later, reports began appearing in newspapers of ghouls in Atlanta. The coincidence is striking. The Columbus Daily Enquirer-Sun reported the theft of the body of a Black child on April 17, 1879. African Americans and the poor were especially vulnerable to grave robbers, but no corpse was safe. The paper also noted that “such robberies are believed to be a regular business in the city.”

The fear of grave robbing started to take hold of Atlantans. Later that April, Judge Hillyer (an Oakland resident) asked the Atlanta Constitution to publish an article with the headline, “Our Native Ghouls,” concerning the rise of body snatching in Atlanta. News of the practice also began to reach other Georgia cities. The Early County News mentioned the “Cincinnati practice of grave robbing” was in Atlanta (April 25, 1879). The day before, the Dawson Journal had reported Atlanta was “infested.” Despite the allegations, news reports have not been found about the practice for the next eight months. All of that changed a week before Christmas 1879.

The first grave robbery in Atlanta where the victim was identified in newspapers took place on December 12, 1879. The body belonged to William Johnson, a ferry operator and the namesake of Johnson Ferry Road. He was interred at the Bethlehem Primitive Baptist Church in Cobb County. George Vaughn, the janitor of the Atlanta Medical College, was arrested as the “ghoul,” or grave robber. Another body was stolen from the Marietta City Cemetery that same day, but it was not known if the two robberies were connected.

One of the more unique cases of Atlanta’s corpses involves two bodies from outside the state. In 1880, Atlanta had two businessmen named Avery: B. F. Avery and Arch Avery. B. F. Avery sold plows, and Arch Avery was a druggist. One day, B. F. Avery received a mysterious barrel labeled “kerosene” in the mail. Avery asked an employee to open the barrel. The unfortunate employee discovered two bodies packed with charcoal. Both had been packed “without the slightest reference to grace of position.” It was eventually determined the bodies had been addressed incorrectly and were meant for Arch Avery and his brother, an employee of the Southern Medical College. Whether or not the bodies were stolen is unknown.

Read part 2 to learn about body-snatching at Oakland Cemetery.