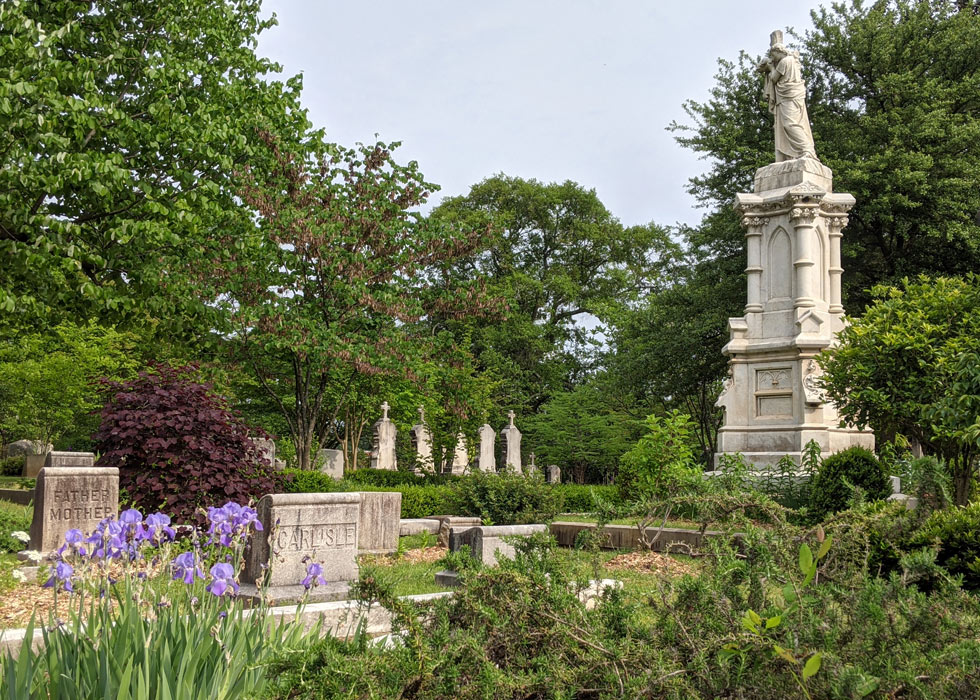 In the view of many people, Willis and Sarah Carlisle were Atlanta’s first permanent residents after the city’s creation. They came to settle in our city, not to pass through or perform a job. They arrived without and prospects or plans simply to see how this new town might develop.

Upon Cousin John Thrasher’s departure from the site of the Monroe Embankment where the gulch is now located, he also left behind a set of Irish laborers who were now stranded in the middle of nowhere with no means of income. Many of them chose to stay in the shacks Thrasher had built or they had built themselves but never owned. The land’s owner, Reuben Cone, was apparently ambivalent to this or unaware and let them stay in the area.

Sarah and Willis came to Atlanta from Marietta. On the day they were married, the Reverend who had married them, Josiah Burke advised that they go south to Terminus to find their fortune. The railroad would soon arrive there and riches were certain to follow.

On June 17, 1842, Willis and Sarah arrived in a wagon full of optimism but with no idea what they would find. They had corresponded with Reuben Cone and arranged to take over the old Thrasher Commissary as their living quarters.

To their surprise, the old store was occupied when they arrived. As Sarah put it, “As we, with our wagons and worldly effects, reached our destination, a rude structure which we had procured from Judge Cone, of Decatur, as a dwelling, we found, to our consternation, that it was occupied, and, what was more, by rude people who refused to vacate. There we were, alone, thrust out into the wilderness without shelter, neighbor, or friend. It was the only available shelter for miles around, having been built by Mr. John Thrasher (known as “Cousin John”) and used years before as a commissary for the old “Monroe Road” hands. It was situated on Marietta Road, in front of the present First Presbyterian Church.”[1]

“The families occupying it were Irish, employed to grade the road, and seemed to be fixtures. We began looking about us for shelter, until we could notify Judge Cone, and finally found an old dilapidated shanty in which cattle had found refuge, and here we camped. After some delay, we obtained possession of shanty number one, which, for comfort, was little better than that we had just vacated.”[1]

The only person the Carlisle’s made regular contact with during this time was Tom Shivers, who drove the stagecoach back and forth between Decatur and Marietta.[2]

Despite the less than ideal accommodations when they arrived, the Carlisle’s stuck it out and became some of Atlanta’s most well-liked citizens as the little town grew up. Willis Carlisle served as part of the first City Council of Marthasville elected in 1843.[3] Sarah and Willis are often given the honor of having had the first baby born in Atlanta though this is a matter of opinion. The name of “Atlanta” was not used until 1845 and there were probably other people living in the area who had children before then.[4]

Willis Carlisle participated in many city affairs and always showed himself to be a supportive, able even sometimes heroic citizen. When Smallpox arrived to Atlanta in 1848 and the town fell into a panic, it was Willis Carlisle who risked his life by volunteering to take the poor suffering victim away from the center of town in his wagon to a temporary hospital they had set up for him near Oakland Cemetery.[5]

Unfortunately, he was not so lucky later when there was an epidemic of Typhoid in Atlanta in 1859. He died and was laid to rest in Oakland Cemetery. His footstone can be seen in Lot 118, plot #9.

His wife Sarah survived many more years after her husband. She was laid to rest nearby in Lot #118 (near the main road) 1898.