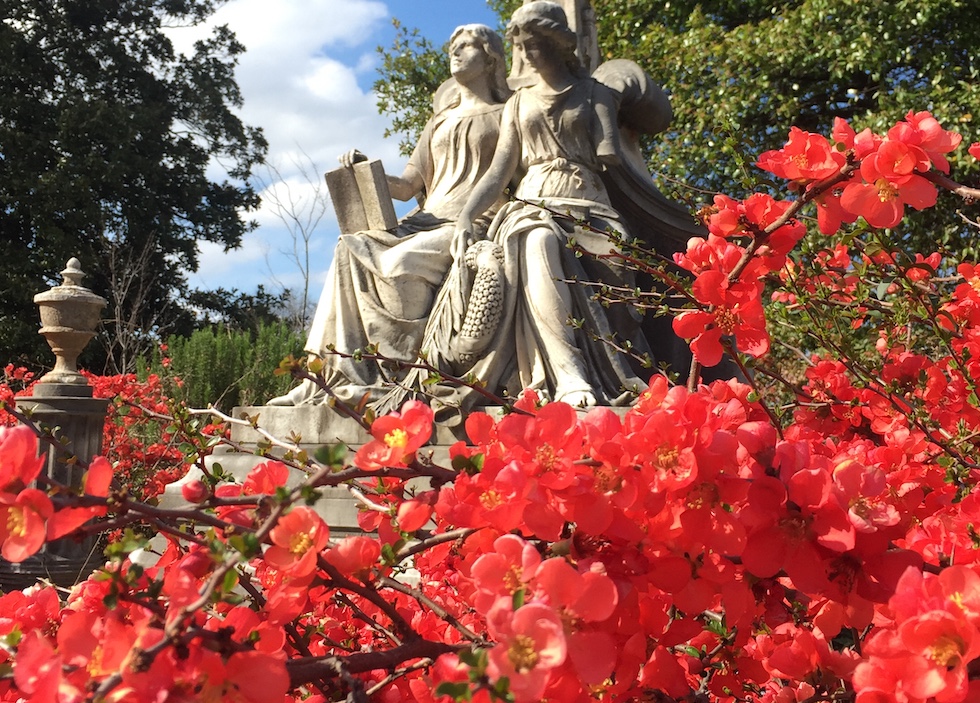 On the second Sunday of May, we celebrate moms everywhere and honor different forms of motherhood.  In honor of this Mother’s Day and all the ladies buried at Oakland, we’re going to focus on a few special Atlanta women. These women were teachers, pioneers, reformers, and more. Not all of these women had children of their own, but they all had love in their hearts and a maternal spirit.

Together, Henry and Annie Rucker were a power couple in Atlanta’s black community. She organized Radcliffe Presbyterian Church in Atlanta. He was appointed a Collector of Internal Revenue by President William McKinley, becoming the first African American man to hold that position. The Ruckers had eight children: Henry, Jr., Elizabeth (Bessie), Lucy Lorene, Jefferson, Neddie, Hazel, Alice, and Ann. Annie allegedly received a loose cut diamond from her husband after each birth! The couple raised their family in their Piedmont Avenue home. Their children all attended college, married well, and became influential in society.

Annie Rucker was very social and would have been familiar with the importance of “mother culture.” Appearing in an 1892 article in The Parent’s Review, the term “mother culture” advocated self-care for women to prevent burnout. It was a belief that a mother needed to continue her personal growth to ensure proper nurturing for her family. Nearly 130 years later, we’re still advocating self-care for all women…and men!

Sarah White Carlisle (1825-1898)
Sarah White Carlisle is often recognized as the “Mother of Atlanta.” Sarah and her husband, Willis Carlisle, decided to move from Marietta to a railroad settlement a few miles south – Terminus – in early 1842. The couple traveled by wagon to a house that a friend had secured. But when they arrived, Sarah and Willis found it full of people who refused to vacate. Alone in the wilderness, the pair spent the night in an old shanty – after they cleared out the cattle that were living inside. This first day in Terminus must have been stressful for the couple but it was likely worse for Sarah, who was seven months pregnant at the time.

The pair moved into a one-room cabin on Marietta Road, which served both as a home and the family business, a grocery store operated by Willis. Sarah returned to Marietta to give birth since there was no doctor in Terminus. She delivered a healthy daughter, Julia, in August 1842. Both mother and daughter returned to Terminus a few weeks later. Three years later, the growing settlement was renamed Atlanta. Julia Carlisle is recognized as the first white baby in Atlanta.

Marie Antoinette Graves Nash (1892-1984)
In 1974, Marie Graves Nash was recognized as “A Mother of Merit” by the Georgia Mothers Association for her work at the Gate City Day Nursery Association. The association was founded in 1905 with the purpose of providing free kindergarten for African American children in Atlanta and still serves Atlanta’s kids today. Marie Nash worked for the association for 30 years and helped grow the operation from one small nursery to five fully staffed nurseries. Marie’s greatest dedication was raising and educating her own children: Catherine (a librarian), Helen and Homer (pediatricians), Harriet (a reading specialist), and Dorothy (a psychologist). 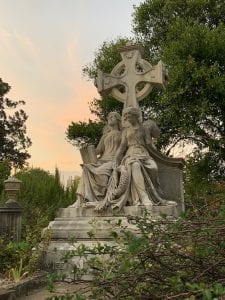 Depicting a mother and daughter, the Neal Monument is one of the most photographed markers at Oakland. Mollie, the mother, is on the left, and her daughter Mary Lizzie sits on the right. Mary Lizzie died when she was 22 and Mollie never recovered from her grief, dying five years later. Both women are buried behind the marker. Thomas Neal had this monument designed to honor his beloved wife and child. It is covered in Victorian symbolism. Both women wear flowing Greek or Roman robes. Each holds a book, likely a Bible or other religious work; the closed book denotes a completed life and the open book symbolizes a heart open to God and the world. The laurel wreath (eternity), the palm branch (spiritual victory over death), the flame (eternal life), and the Celtic cross (eternal life; faith and redemption) are all traditional symbols. The symbols show that Thomas Neal hoped that both women would be together forever in eternity.

Sarah Dye (1828-1888)
During the siege of Atlanta in July 1864, Sarah Dye and her children took shelter from Union shells in a bomb crater in her backyard. Her husband, Thomas Dye, was away working for the railroad and Sarah was alone. Her two-year-old son, John Morgan, became ill during the shelling and died. Desperate to give her child a proper burial, a grieving Sarah found a wooden box to use as a casket and set out towards Oakland. As shells rained down around her, Sarah walked Atlanta’s empty streets. A man cautioned her to go home, but Sarah ignored his advice. He gave her a ride in his wagon to Oakland and helped her dig the grave. John Morgan was laid to rest in the family lot next to another child who had died young (Mintory, age 3). Sarah Dye stayed at Oakland until after dark and then returned home to care for children.

Carrie Steele Logan (1829-1900)
Carrie Steele Logan’s epitaph speaks to her passion and purpose in life – “The Mother of Orphans. She hath done what she could.” Carrie Steele was born into slavery and orphaned as a child. After emancipation, she worked as a maid in the Union Station waiting rooms where she saw many abandoned children hanging around the train station. She began placing the children in a boxcar to play during the day, and at night she took them to her home on Auburn Avenue. The group quickly outgrew her house. To raise money for a larger facility, Steele Logan solicited donations from the community and published and sold a short account of her life. In 1888, the Carrie Steele Orphan Home was founded and a three-story brick structure was built in 1892 to house 50 children. Today, the Carrie Steele-Pitts Home (renamed in honor of Clara Maxwell Pitts, 2nd Director of the orphanage) continues to serve neglected, abused, and orphaned children.