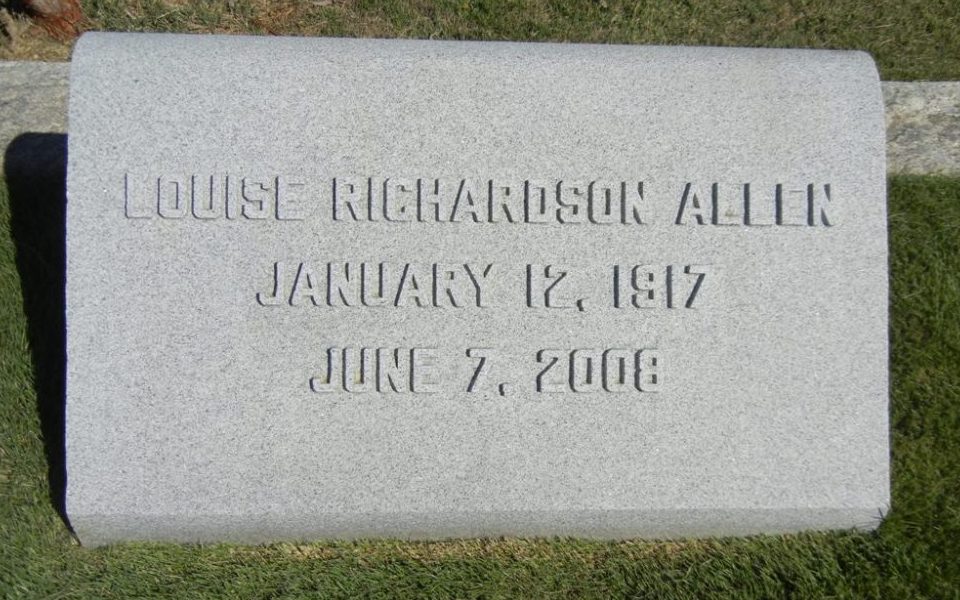 On January 12, 2017 Oakland Cemetery resident Louise Richardson Allen would have been 100 years old. In commemoration of her centennial birthday, we remember this instrumental Atlantan’s legacy here in a remembrance that was originally published in the Atlanta Journal-Constitution on June 8, 2008, one day after she died.

Louise Richardson Allen, known to many as Atlanta’s First Lady in the 1960s, died at her Northside Drive home on Saturday, June 7, 2008.  She was 91 years old.

The youngest of four children of Hugh and Josephine Inman Richardson, Mrs. Allen was born January 12, 1917 in the West Peachtree Street home of her grandmother, Mrs. Hugh T. Inman.  In 1923, the Richardsons moved to the family’s new home, “Broadlands,” off West Paces Ferry Road.  On that family property, Louise and her husband, Ivan Allen, Jr., built their own home in 1951, where she lived and gardened for 57 years.

She graduated from Rosemary Hall, then in Greenwich, Connecticut, and attended Vassar College in Poughkeepsie, New York.  With her lifelong friend, the late Anne Alston Glenn, Louise was presented to Queen Mary and Edward, Prince of Wales, at the Court of St. James in June, 1935.

On January 1, 1936, she was married to Ivan Allen, Jr. at the First Presbyterian Church of Atlanta, where she was a lifelong member.  In their sixty-seven years of marriage, they had three children: Ivan Allen, III, who died in 1992, Hugh Inman Allen, and Beaumont Allen [Ed. note: Beaumont Allen passed on August 9, 2014. Oakland Cemetery’s Beaumont Allen Greenhouse is named in his honor.]

During the World War II years, Louise served as president of the Junior League of Atlanta.  She began the Fashionata, which became an annual charitable event sponsored by Rich’s Department Stores, to raise money for Junior League community service programs.  As a trustee of the Henrietta Egleston Hospital, now part of Children’s Healthcare of Atlanta, she and others started the Bal de Salut in 1959 to benefit the hospital.

She was a founder of the Atlanta Speech School and a founding trustee of The Westminster Schools.  She was a founding member and trustee of the Georgia Trust for Historic Preservation, the Atlanta Botanical Garden, the Forward Arts Foundation, the Cherokee Garden Library, and the Historic Oakland Foundation.  She was the state Historian of the National Society of the Colonial Dames of America in the State of Georgia.

In 1967, she joined the board of trustees of the Atlanta Historical Society, and later served as chairman and chairman emeritus.  When the Swan House, the home of her late uncle and aunt, Edward and Emily Inman, came on the market, she convinced the Historical Society board to purchase it and relocate its headquarters to Andrews Drive and West Paces Ferry Road.  To restore and beautify the grounds, she enlisted 32 garden clubs, including her own Mimosa, to support the effort with volunteer work and financial resources.

Later she was instrumental in acquiring and moving the Tullie Smith House, an 1840s farmhouse, to the History Center grounds, and led the effort to raise the money to build the Atlanta History Museum, which opened in 1993.  After she declined the AHS board’s resolution naming the museum for her, it dedicated the building to her and named the museum’s atrium in her honor.

While her husband Ivan was campaigning for mayor of Atlanta, she was often at his side at rallies across the city.  She accompanied him the night that Martin Luther King was assassinated, and helped comfort Mrs. Coretta Scott King after Mayor Allen told her that Dr. King had died in a Memphis hospital.

Louise Allen loved to visit gardens in England and Scotland and often brought back ideas that she later implemented in her own garden and on the 33-acre grounds of the Atlanta History Center.  She was a pioneer in introducing new plant specimens to Atlanta, and was an early advocate of the increased use of native plants in the southern landscape.

In 1969 the city of Atlanta honored Louise Allen for civic service, naming her “Woman of the Year.”  In 1987 she received the Governors’ Award in the 11 Alive Community Service Award Program.  In 1991 she was honored as Georgia Fund Raising Volunteer of the Year by the Association of Fund Raising Professionals, and in 2003 she was named one of Atlanta’s Defining Women in an Atlanta History Center exhibit and program.