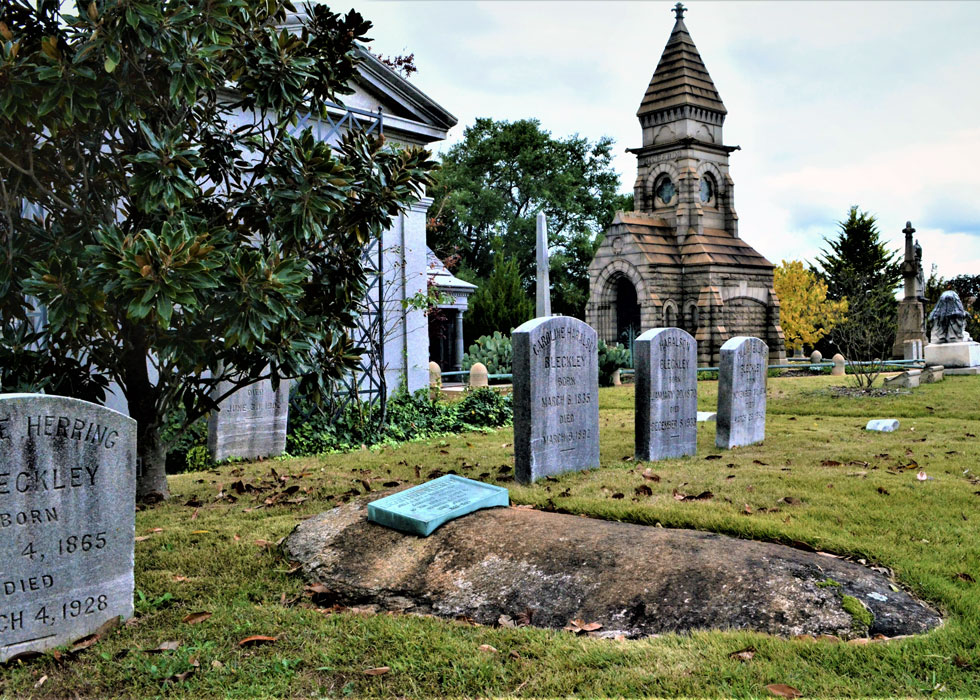 Georgia’s 159 counties are second in number in the United States only to Texas’s 254 counties. By legend, Georgia created so many counties to accommodate the time it took a farmer on a horse or mule-drawn wagon to travel to the courthouse and back in one day. More plausibly, the plethora of counties was established so Georgia’s sparsely populated rural areas could control the state legislature under the old county unit political system.

But why are Georgia’s counties of interest to Oakland Cemetery? Because three counties are named in honor of three of Oakland’s “silent citizens” – statesman Benjamin H. Hill, jurist Logan Bleckley, and Civil War general Clement A. Evans. Two other Georgia county namesakes, journalist Henry Grady and statesman Alexander H. Stephens, were temporarily interred at Oakland in the 19th century. 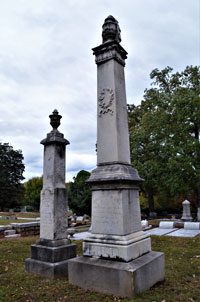 Ben Hill County, located in southern Georgia, was established in 1906. The county seat, Fitzgerald, has interesting origins. It was founded by an Indiana newspaper editor in the 1890s as a planned community for Civil War veterans, both Union and Confederate. Fitzgerald is also home to a colorful colony of wild Burmese chickens, the remnants of a failed game bird experiment.

In his long public career, Benjamin Harvey Hill (1823-1882) was a prosperous attorney in LaGrange, an unsuccessful candidate for Georgia governor on the Know Nothing Party ticket, an opponent of secession, a Confederate senator, an opponent of Reconstruction-turned advocate for the acceptance of Reconstruction, a booster of the New South, and a U.S. congressman and senator. Four years after his death, the dedication ceremony in Atlanta for Hill’s massive marble statue (now standing in the state capitol) drew a crowd estimated of 100,000 people.

Hill’s grave is on East Hill, on the eastern end of Oakland Cemetery. Inscribed on his monument are words he penned after his famed orator’s voice had been stilled by cancer of the tongue, which would soon claim his life. The inscription reads, in part: “If a grain of corn will die and then rise again in so much beauty, why may not I die and then rise again in infinite beauty and life?”

Bleckley County, in central Georgia, was established in 1912 and its county seat is Cochran. Logan Bleckley (1827-1907) rose from humble beginnings in the mountains of Rabun County to become one of Georgia’s most acclaimed jurists. The decisions he wrote as justice and chief justice of the Georgia Supreme Court were admired around the country for their legal brilliance, concision, and wit. Sometimes they even included a bit of Bleckley’s own poetry.

Bleckley’s grave, which is behind the Bell Tower, is unique to the cemetery in that it is topped by a large boulder.

As a young lawyer in Atlanta in the 1850s, Bleckley partnered with future Civil War general John B. Gordon and Basil Overby, who would run unsuccessfully for governor as a Temperance Party candidate (Gordon and Overby are also buried at Oakland, Overby next to the Bleckley plot). The three men also were brothers-in-law, each having married a Haralson sister from LaGrange.

Bleckley’s grave, which is behind the Bell Tower, is unique to the cemetery in that it is topped by a large boulder. The boulder is said to have come from Bleckley’s native Screamer Mountain in Rabun County. 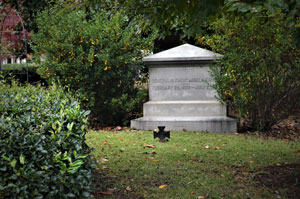 Evans County, in southeast Georgia, was established in 1914. Its county seat is Claxton, the “Fruit Cake Capital of the World.” Clement Anselm Evans (1833-1911) was a lawyer, judge, and state senator before the Civil War. When war came, he enlisted in the Confederate army as a private, then rose through the ranks to become a major general in the Army of Northern Virginia. Evans was so horrified by the carnage he witnessed at the Battle of Fredericksburg that he resolved to follow a path of godliness and Christian service after the war. He kept his vow, becoming a Methodist minister and pastoring for years at churches throughout Georgia.

Evans was also a prominent figure in the Lost Cause of the Confederacy movement. He was active in Confederate veteran organizations and, upon his death in 1911, was buried in his gray Confederate uniform. Evans is buried next to Oakland’s Confederate Obelisk near the graves of two other Civil War generals, John B. Gordon and Alfred Iverson, Jr.

To learn about more Oakland history and residents, attend the Sights, Symbols, and Stories of Oakland tour. Tours start from the Bell Tower and do not require reservations.