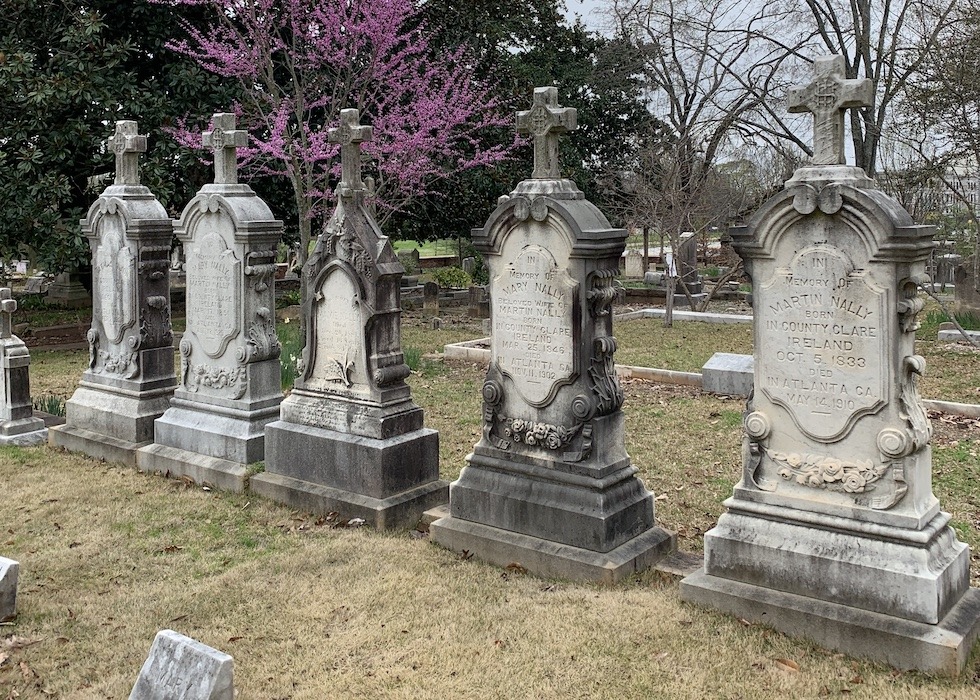 In honor of Saint Patrick’s Day, meet a few of Oakland’s residents from the Emerald Isle. From County Meath on the Irish Sea to Galway on Ireland’s western coast, these Irish men and women left their mark on their adopted home of Atlanta.

Timothy Burke
Timothy Burke was born in County Clare in 1806 and immigrated to New York in 1835. He eventually moved to Atlanta where he found work at the Key Bookstore, which produced Atlanta’s first daily newspaper in 1854. Burke worked on the paper until it went bankrupt, and then pursued a career in liquor sales until he retired in 1886.

Burke was a devoted member of the Hibernian Benevolent Society. In 1858, Irish shopkeeper Bernard Lamb founded a group to aid new Irish immigrants in Atlanta. The Hibernians became more of a social organization and held their annual meeting on St. Patrick’s Day. Burke served as president of the Hibernians several times.

Burke died on October 12, 1891. His Atlanta Constitution obituary read that Burke “possessed those admirable traits of character – frankness, fairness, wit, and good humor, which so adorn his countrymen the world over.”

Daniel and Mary Ann Dougherty
Born in County Donegal in Ireland, Daniel Dougherty immigrated to Atlanta as a young man. He met and married Mary Ann Connelly (also listed as Connally), the daughter of Irish native Patrick Connelly. True to his name, Dougherty opened the first bakery in Atlanta. He also operated a ten-pin bowling alley on Peachtree Street. Dougherty’s short, yet busy life came to an end on April 17, 1855. A man named Martin stabbed Dougherty in the abdomen on Whitehall Street and then escaped. Dougherty’s murderer was never brought to justice.

Mary Ann Dougherty inherited land in downtown Atlanta from both her father and husband. Her estate, which included a Marietta Street property located just south of Woodruff Park, was valued at nearly a million dollars at the time of her death in January 1892. The land ultimately became the Peachtree Arcade, Atlanta’s first indoor shopping mall. Constructed in 1917 at the corner of Peachtree and Marietta Streets, the Beaux-Arts style building featured three floors of shops and a glass ceiling. The building was demolished in 1964 for the First National Bank Building of Atlanta, which is now the GSU Andrew Young School of Policy Studies.

Martin Nally
Like Timothy Burke, Martin Nally immigrated from County Clare. The twenty-seven-year-old enlisted in Georgia’s 19th Infantry Regiment in June 1861. An estimated 150,000 Irish-born boys and men fought for the Union during the Civil War; Between 30,000 and 40,000 Irish fought for the Confederate cause. Many Irish-Americans on both sides formed military units, such as the Confederacy’s Hibernian Rifles unit, that embraced Catholic traditions like priest-led mass.

After the war, Nally joined the Hibernians and served in Atlanta’s volunteer fire department. He is buried in the Original Six Acres next to his first and second wives, two County Clare women both named Mary.

John Connally
A native of County Galway on Ireland’s west coast, John Connally was elected as Oakland’s sexton in 1869. Connally managed cemetery staff, presided over burials, and kept records. He made $1000 a year, which is roughly $19,000 in today’s currency.

Irish Horse Traders
According to oral histories, a group of Irish horse traders immigrated to the United States in the early 19th century. Relocating from place to place, the travelers moved through Georgia, Tennessee, and South Carolina. The group was comprised of eight Irish families: the Rileys, McNamaras, Carrolls, Sherlocks, Garmans, Costellos, Dartys, and O’Haras.

The group held an annual reunion on April 28 in Atlanta where Catholic priests could be found. Couples were married and the dead were buried. Funeral masses took place at the Shrine of the Immaculate Conception and then the Irish traders processed to Oakland Cemetery. The tradition started with John McNamara, the son of County Mayo native Annie McNamara, in 1881. Traders who met on the road often parted with the phrase, “See you at the funeral.”

Lynch Brothers
The Lynch brother immigrated from the village of Slane in County Meath in 1847 to avoid potato famine blight.