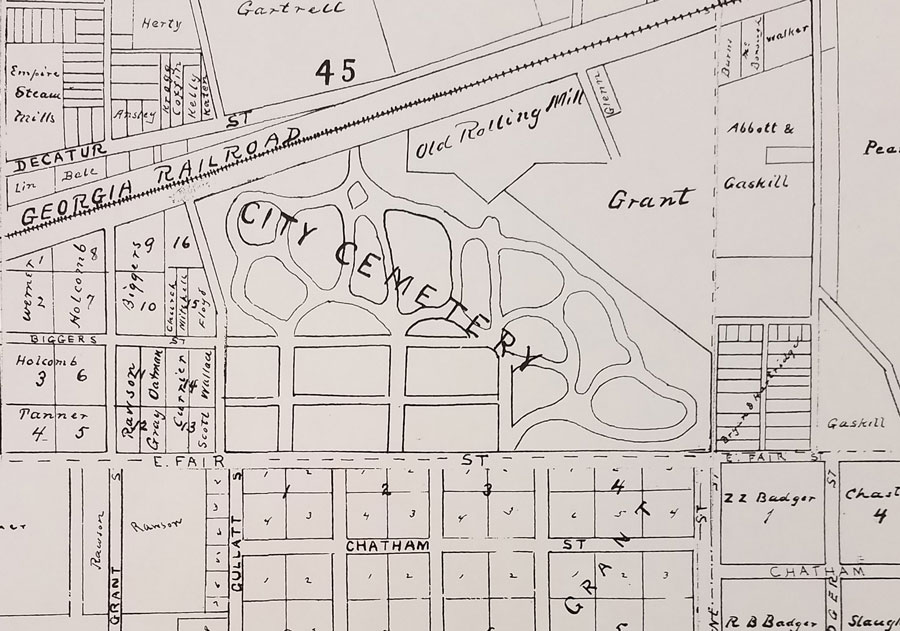 In 1866 the City of Atlanta began its long-needed expansion of the City Grave Yard. While the design we know today was laid out in early 1867, the roots of its design reach back to the preceding decade.

During the 1850s many growing towns established new cemeteries, or expanded their existing municipal burial grounds. As befitting these towns’ rising importance as population centers, professional landscape gardeners were hired to implement the fashionable “rural cemetery” aesthetic – wide vistas, gently curving drives, and tasteful landscaping. However, as these cemeteries were municipal facilities with important functions overseen by practical men, many a pragmatic town maintained a grid overlay for facilitating regular lot sales and orderly interments.

Atlanta was no different; one of the earliest maps depicting the cemetery, Vincent’s Subdivision Map of Atlanta dating to around 1853, shows a rectangle bordered by city roads, graced by the only trees and shrubbery on the entire map.

Alphonse Lambert, the person responsible for Oakland’s rural design, immigrated to America from Belgium in 1855. Alphonse made Rome, Ga., his destination, while his older brother settled in Atlanta. Thus, a young Alphonse Lambert witnessed the creation of Rome’s rural cemetery in 1856 or 1857. Sited atop a hill at the confluence of the Etowah and Oostanaula Rivers, Myrtle Hill Cemetery is of a concentric pattern of drives with a central cross axis, creating the primary burial spaces. The roads provided sweeping vistas, gentle inclines for wagon and carriage access, and a means of terracing the steep slopes to create more usable land.

After four years in Rome, Alphonse left for the bustling town of Atlanta. His brother Joseph was already involved with the horticulture trade in town, and Alphonse seems to have fit right in; the brothers even married sisters of Irish descent. Alphonse was not the only nurseryman to relocate to Atlanta in the war years. In 1863 Joseph’s Fulton Nursery was in a business relationship with George Kidd. Formerly of Columbus, Ga., Kidd had written to regional publications on the subject of landscape gardening before the war. In his 1863 newspaper notice, Kidd touted his skills as a landscape gardener and ability to furnish plants to “cemetery and suburban residences.” In 1872 Kidd advertised his services as a landscape gardener in The Plantation, giving Gen. John B. Gordon as a reference.

Alphonse Lambert and the Rural Design
While George Kidd’s name has faded, his legacy may not have. By 1867 Alphonse had risen to a junior partner in his brother’s Fulton Nursery. Joseph’s announcement of the new venture promotes a stock of “fruit trees, evergreens, grape vines, roses, etc.” In early 1867 the Committee on Cemetery selects Alphonse as the “landscape gardener” to lay out the new cemetery. Perchance the association with George Kidd contributed to Alphonse’s training in the art of landscape gardening.

At Oakland, Alphonse adapted many of the design strategies and features of the rural cemetery movement. Yet Oakland’s existing configuration of a very large rectangle dominated by existing roads and drives constrained his visionary design almost as much as the cemetery’s topography.

Alphonse’s design by necessity launched from the existing, dominant, rectangular cemetery. A central drive bifurcated the original burial ground (now Hunter Drive). A cross-drive probably was cut north-south along the edge of the Public Ground (now North Public Grounds), based on its great width and its appearance in the 1878 Atlas of Atlanta. By the early 1850s Holcombe Street (now part of Monument Drive) bounded the on the north side, as shown in an 1857 map in the City Council Minutes. An unnamed road bounded the east end, providing back access to what was then Slave Square, dividing the cemetery from James Seavy’s property. This road is shown in Vincent’s Subdivision Map of the City of Atlanta. 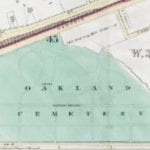 Alphonse’s challenge became how to create graceful curves on a swath of land with steep hills and a floodplain ending in a creek, all around a large rectangle complete with numerous wide rectilinear drives, none of which could be altered.

One of the earliest renderings of Alphonse’s original design comes from the 1878 City Atlas of Atlanta, Georgia. While likely fraught with a few alignment issues around Jewish Flats and showing access points that are not rendered in other maps, the map illustrates the original drives as laid out along the topography of the area, and cross drives no longer much considered or lost to replotting.

The north area, with its gentle rolling terrain, was most amenable to the new aesthetic. The drives have gentle inclines that are easy on horses and not susceptible to rutting and wash outs. A wide, inviting entrance was created at the railroad tracks, allowing visitors, interments and deliveries to pass readily. This wide entrance area generally aligns with the original Read Street roadbed, which seems to have run along the ridgeline. The wide loop from the ridgetop and the new cemetery gate through the northeast area again provides views and gentle passage, swinging wide to allow access to the farther back areas of the cemetery as well as to avoid the steep hillside down to what is now called Greenhouse Valley.

The creek’s floodplain – the least desirable land – was ceded to Potter’s Field for pauper burials. The drier upland portion was terraced by two gentle, looping drives (the upper loop drive was later converted to burial lots) and demarcated for African Americans who could afford to purchase burial lots. A third short drive provided additional terracing and connected the loop drives southward. A curved drive northward divided the paupers’ grounds, providing wagon access through the area.

A curve was superimposed around the Confederate Burial Grounds north side, partly to facilitate terracing of the adjacent lots to the north (the hillside of “Greenhouse Valley”) but also to lessen the steepness of the drive up the hill. The early drive dividing Slave Square from the Confederate Burial Grounds became a permanent gate, providing a “halfway point” entrance.

The east end of the cemetery proved challenging. Long and comparatively narrow, creating gentle curved roads for terracing wasn’t practical on its steep hillsides. Instead, the main drive (Hunter Drive) was continued to provide through-access, while Holcombe Street was extended to create a new parallel road, just uphill from the floodplain. This road extension would provide the visual focus back into the cemetery, the rows of Confederate dead as its dominating view. This viewshed became all the more arresting after the construction of the Confederate Obelisk.

While everyone could be buried at the cemetery, a de facto class system was imposed via economics.

Once the overarching design was set, the City of Atlanta formulated the finer points of the practical grid system. While everyone could be buried at the cemetery, a de facto class system was imposed via economics. A system of lot size and walkway width was instituted. The choicest, first-class lots with the best land and views were $50. The largest of this class measured 20 feet by 30 feet, with 10-foot walkways. At the end of the spectrum, freedmen were permitted $10 lots with no mention of walkways.

Unsurprisingly, the areas of flat or gently rolling land and sweeping vistas were deemed prime real estate. The City sexton’s office was placed here, ensuring the sexton could oversee the lots of the wealthy, who in turn were assured of ready access to the city official. It was also centrally located for the workmen (the office had a tool room in back) and was readily accessible to comings and goings by train.

One of the greatest visual changes from the old cemetery to the new was the decision to “cut” in the new walkways. Before the Civil War, in the Original Six Acres and the Seavy land acquired in 1857, with little exception the walkways rise and fall with the original ground surface. In the new areas of the cemetery, the walkways are regularly cut down below the original surface, even if only a foot or two. Presumably the intention was to create walks with as little change in grade as possible for ease of walking and carriage access. However, its consequence is the accentuation of the old “grid” style of the cemetery, and is one of the stark design contrasts to the “cemetery park” or “cemetery lawn” design as seen at Westview and other such cemeteries.

Around the turn of the 20th century, demand for additional burial space led to the development of land outside of, or even within, Alphonse Lambert’s original plan. This is very visible in the north area adjacent to the railroad tracks, between the old railroad gate and the pauper’s grounds. Not only is the angular walkway design ungainly, its discontinuous lot numbering system stands in stark contrast to the rest of the new cemetery. Other, smaller areas pressed into service include the narrow strip along the Boulevard wall, the upper drive through the African American Grounds and its connecting south drive, walkways in Jewish Flats, and likely the large lots along the east border of South Public Grounds. Other drives were added to facilitate vehicular access, particularly along the west wall (today’s MARTA parking lot), and along the eastern section of Memorial Drive.

While not of erudite high-style design, and somewhat cluttered and obscured over the years, Alphonse Lambert’s curving roads and carefully considered vistas continue to shape our enjoyment of the land we know as Oakland.

Alphonse’s selection to lay out Oakland apparently was the break he needed to set his own horticultural destiny as an independent nurseryman. By 1869 he had struck out on his own, while brother Joseph remained on Atlanta’s West Side until his death. Lambert Street today barely survives on Georgia Tech’s campus, just north of the Northside Drive and North Avenue intersection. Alphonse moved to the sparsely settled east side, selecting land across the street from Oakland Cemetery. It was a shrewd business decision, for although Alphonse’s Central Nursery was never the largest in town, it remained viable through the early 20th century, passing after his death to his wife then after her death to one of their sons. Another shrewd business move on Alphonse’s part was to advertise himself as a landscape gardener, and moreover to offer his landscaping services for cemetery lots.

Sara Van Beck is a member of Historic Oakland Foundation’s gardens team. She is a leading daffodil authority and author of Daffodils in American Gardens: 1733-1940.