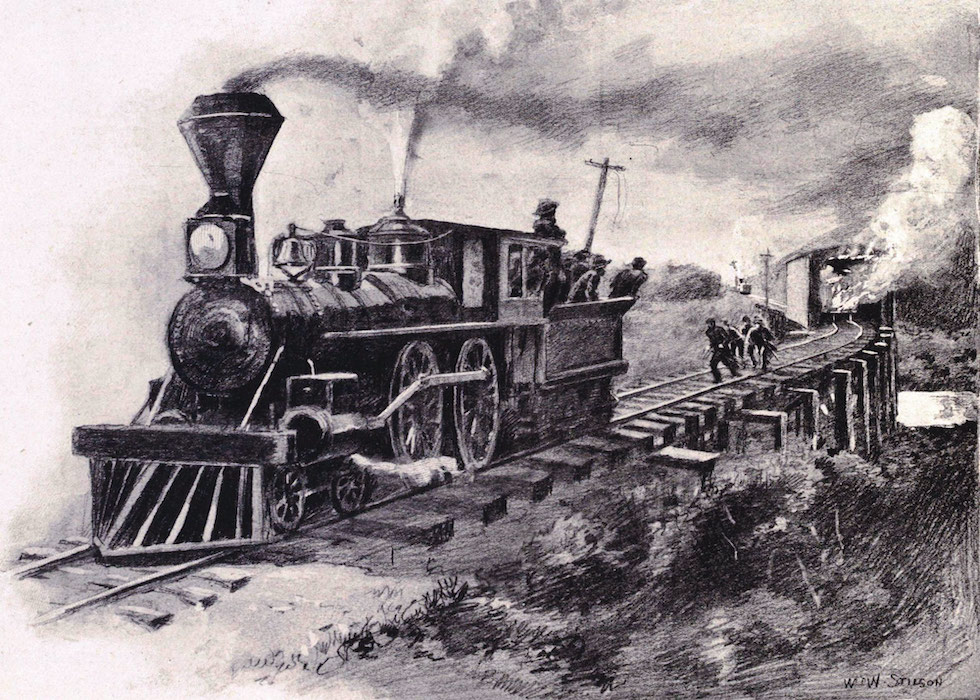 In the early hours of April 12, 1862, Kentuckian James Andrews – along with a group of 21 Union soldiers from Ohio – initiated a plan of sabotage that became one of the most infamous events of the Civil War. The group, known to history as Andrews’ Raiders, planned to steal a railroad engine and destroy railroad bridges and communication lines from Atlanta to Chattanooga, Tennessee. Federal troops were coordinating an attack on the Confederate hub of Chattanooga and the raiders hoped this sabotage would disrupt any chance of Confederate reinforcement. Their target was a northbound train, pulled by the engine General and conducted by the youngest conductor on the Western and Atlantic Railroad, 26-year-old William Allen Fuller.

The raiders traveled in small groups in civilian clothing to avoid arousing suspicion. Only 20 of the 22 raiders reported to the meeting point at the train station. Two overslept and missed the train. When the train stopped for breakfast at Big Shanty, Georgia (now Kennesaw), the train crew and most passengers disembarked for a 20-minute break. Andrews and his men, claiming they’d already had breakfast at their hotel, stayed onboard until the train crew exited.  Then, they unhitched all the passenger cars (keeping several boxcars) and steamed away with the train. Conductor Fuller and the engineer, Jeff Cain, along with Anthony Murphy, a railroad shop supervisor, began the chase on foot.

Soon the pursuers encountered a work gang with a push-trolley. They commandeered the trolley and were able to increase their speed. After an all-day chase, the determined Fuller and Murphy (Cain gave out) used three different borrowed engines to pursue the raiders. The final leg of the chase involved using a borrowed engine, the Texas, and running it to speeds of 65 mph backwards in hot pursuit of the General. Fuller and Murphy kept so much pressure on the men aboard the General that they were unable to take on wood and water. This forced the raiders to abandon the General near Rossville, Georgia, and flee into the woods. Unfortunately for them, Confederate soldiers were training in the area.

All of the members of the raiding party were captured, including the two who had overslept.  They had to endure trials and incarceration. James Andrews was executed by hanging. Two weeks later, seven more of the raiders were hung on property adjacent to Oakland Cemetery. Eight of the survivors were able to escape from Atlanta’s Fulton County jail and the other six were eventually exchanged as prisoners of war.

William Fuller, Jeff Cain, Anthony Murphy, and other Confederates involved in the chase were hailed as heroes throughout the Confederacy. James Andrews and his men were celebrated in the Union for their bravery. The first Medals of Honor were awarded to several of the raiders, some posthumously. As a civilian, James Andrews was not eligible to receive the award. Andrews was temporarily buried in midtown Atlanta. Later, his body was removed and buried in Chattanooga National Cemetery in 1887. Several of the participants on the Confederate side (including Fuller, Cain, and Murphy) are buried at Oakland Cemetery. The great Civil War event has been featured in several books, television shows, and films – including The General (1926) and The Great Locomotive Chase (1956).