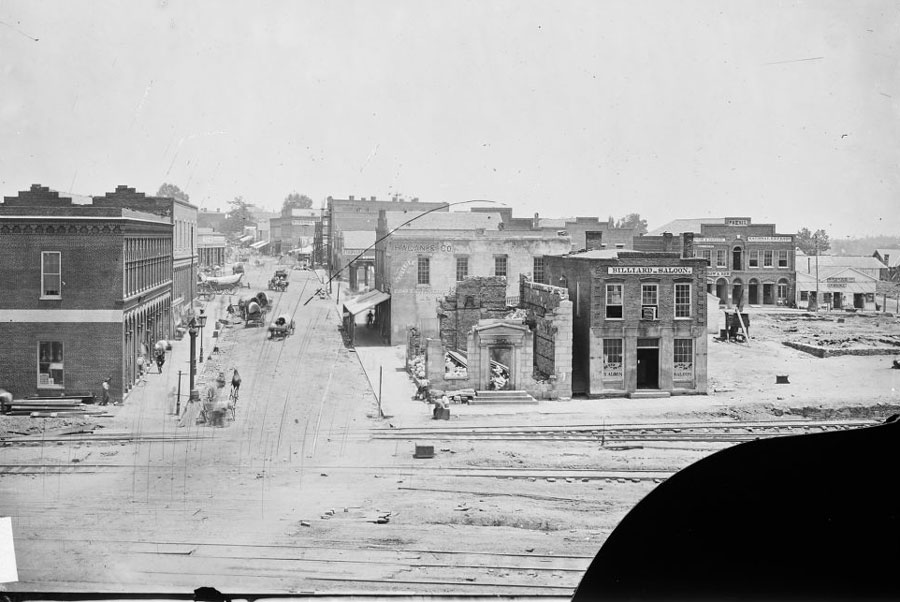 In 1867 Atlanta, once more the winds of change are blowing.  There are those that believe to be more “fashionable,” Atlanta should change its street names to be more like New York City and other cities with “Avenues” and “Front” streets, etc., in spite of the fact that there is no waterfront to be found in the city.

Atlanta City Council is now wrestling with the problem and has appointed a committee to make recommendations for changes to the Council.  It is interesting to note that neither of the arguments concern themselves with the recent Confederacy or perceived heroes thereof.  That will come later, as new subdivisions are developed and streets are named by the developers.

Future Oakland Cemetery resident James Clarke, who sometimes writes for the Intelligencer, has called himself a “Minority Committee” and has answered the recommendations with a different opinion that he would like to see submitted to the Mayor and Council.

Here is the Committee’s report, followed immediately James Clarke’s response. (Editor’s Note: This report has been rewritten it in its entirety because the newspaper source is so badly distorted that it is extremely difficult to read unless one is practiced in parsing old texts.)

To the Honorable Mayor and Council of the City of Atlanta:

The committee to whom was referred the petition of many citizens, asking for the re-naming of streets and the numbering of houses, &c. beg leave to report:  That, having fully considered the matter, they are satisfied that the adoption of the plan offered will afford great convenience to our citizens, and do away, to a great extent, the confusion with strangers, and recommend the granting of the petition as follows:

2d.  That where two streets run into each other, they shall hereafter be known under one name.

4’th.  That the Georgia Railroad and Western and Atlantic Railroad shall be known as ‘Railroad Avenue West,’ from Whitehall street to the limits of the city west.

14’th.  That we recommend the establishment of easy and permanent grades to the streets, and the grading to the inner sides of each lot, by permission, so that the fencing may be on a level with the street, and conductors for water made inside this line, and that all lot owners or tenants be requested to set out shade trees.

15’th.  That the City Engineer be requested to furnish to each owner or occupant of any business house, or residence, the number, properly attaching upon the plan of subdividing (into fronts of twenty-five (25) feet, running back one hundred feet, or less as may be where not already build upon.)  at his earliest convenience, and the number entered upon the new map to govern future deeds.

16’th.  That a contract be made by the city for numbering each business house and residence, and the owner or tenant be required to pay the same.

17’th.  That the Street Committee be authorized to put up a suitable number of sign boards at the corners of the different streets indicating the same.

18’th.  That the name of ‘Oak’ be given to the cross street connecting Peachtree street with Ivey street, commencing at W. M. Lowry’s residence, and ending at (Formerly) Fishback’s property.

Mr. Clark, one of said Committee, submitted the following as a minority report:

To the Honorable Mayor and Council:

As far as this scheme proposes the alterations of the names of certain streets of the city, it is subject to several grave objections.  We do not say that no circumstances will justify a change of the names of streets; but we do say, that such change should not be made without very solid reasons, and without the unanimous consent of the property holders on the street to be changed.  We see here no sufficient reasons for, and see many strong reasons against the change.

1’st.  All the title deeds of the entire property of the city are made with important reference to the present names of the streets; the boundaries, the identity of every man’s property, are ascertained by the streets under and by their present names.  The changes contemplated would have an unsettling and disturbing influence on property interests and possessions throughout the city.  In their metes and bounds, they will have no connection or reference whatever to the new-fangled names, but are evidence and identified on the records of the country, and by the judgements of the courts, alone by the present streets with their present long-established names.  The changes, therefore, would be unsettling and disturbing in their influence, and might lead to litigation and confusion.

2’nd.  It is a ‘Bad Precedent’.  The same disposition to change, with reasons fully as strong as any that may lead to the innovations proposed now, may, in future years, repeat the same unsettling and disturbing influence, to the utter want of that stability which should exist in all human affairs.  This tendency should be guarded against by the city government, by arresting, at the outset, every attempt to innovate or unsettle what has been long established.

And this principle holds, whether the name has any intrinsic value or not; it is sufficient that it has a value in the estimation of the property holder himself, and however others may view it, so far as its value is concerned, it is his right for which he has paid his money and it should not be violated.

4’th.  This city has grown up and acquired its present importance with their present existing names of her streets.  In the names of the streets there have been found no hindering cause to our progress.  The names of our principal commercial streets are well known throughout the South, so far as our trade and commercial correspondence extend.  Orders have been sent for years to houses on these streets by their present names.  City registers, for the information of the public, have been compiled, and sent forth at considerable expense of labor and money.  The city, then, so far as it is known abroad, is known as it is, by and with the present names of its thoroughfares.

Now, would it be sound policy, would it be just to merchants and owners of property, who have obtained notoriety and advantages abroad by and under the present names of the streets, to destroy this notoriety and these advantages, by the introduction of new names, and thus to throw that confusion into the city that would inevitably result?  The principal streets of the city are well known, at home and abroad, as important streets, by their present names, and have been from an early period of our history.  A change of their names would be clearly an invasion of their importance.  Even the man who has acquired eminence under a certain name, with a new name given and the old time-honored one obliterated, would, with the loss of his name, lose much of his distinction in the world.  So that we see there is much, and can be much, in a name.

There is nothing in the names of the streets proposed to be changed that is objectionable, and no reason whatever against the names.  Marietta street has a pointing towards a young city on the Western and Atlantic Railroad, which, before the war, was distinguished for its beauty, the refinement and intelligence of its people, and for its growing importance; and will become equally as distinguished again, and may well give name to that important street of our city which leads in that direction.  The standing Peachtree is a locality well known in Georgia for the last generation, and as it has given a name to an important street of Atlanta for more than twenty years, the name has acquired a notoriety and respectability which may not be assailed.

Decatur street directs to Decatur, an important and fashionable town when the street was named, and within six miles of our city, and which, if this city increases in population and importance, as anticipated by it friends, will again acquire respectability and importance by is near proximity to us.  Take, therefore, Decatur as it was, and as it will again become in a few years, there is every reason why this name, consecrated, as it is, by one of our most illustrious naval heroes, should remain unaltered.

Alabama street has a pointing to an important State on our western border, a liberal patron of our trade for many past years, and will certainly be a more munificent patron when the important railroad to Jacksonville is completed.  The name, therefore, of the street derived from this great State, so important to us at present and in prospect, should not be changed.

We therefore object to any alterations in the names of the streets.

So far as this scheme contemplates giving names to the reservations on each side of the railroads centering here, thus dividing the city, by these avenues, into four grand divisions, which we consider the most important feature of the plan, we make no objections, and are much in favor of having all the tenements on the streets numbered.  We cannot conceive the present names of our principal streets, widely and well known as they are, to be, in any sense, and obstacle to this work.  The numbering can be accomplished on the present streets with their present names as accurately as under any new names that might be given, as new names would neither increase nor diminish the number of houses to be numbered; nay, each number and house would be better known and more readily found and approached on the streets having the present well known and familiar names, than they could by and scheme of alteration in names that could be adopted.

We therefore recommend that the plan, so far as it concerns the railroad and avenues in the city, and the numbering of the houses on the streets be adopted—the names of the streets remaining unaltered.  All of which is respectfully submitted.

If you would like to discuss Mr. Clarke’s opinions or objections with him, he can be found within the red circle during Oakland Cemetery’s normal hours — and he is quite attentive!