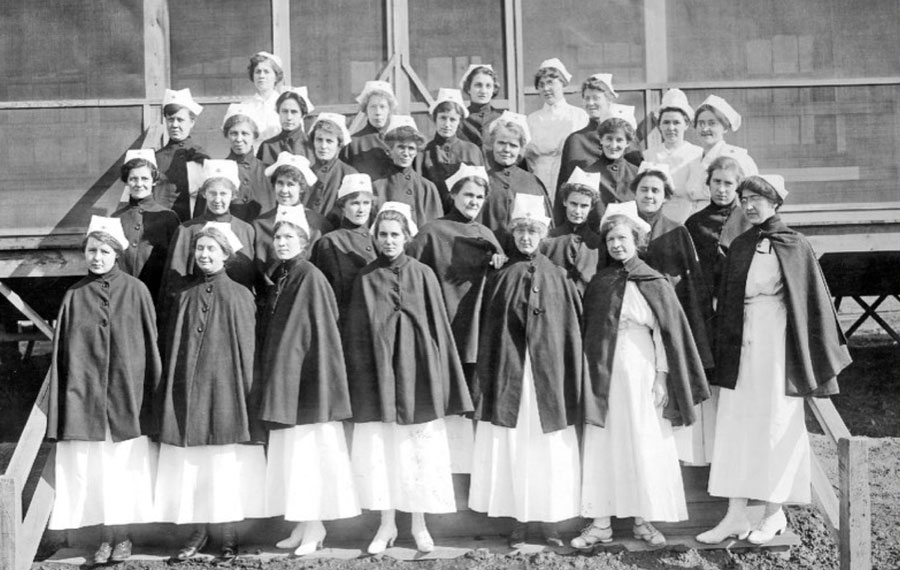 On April 6, 1917, the United States officially entered World War I. The declaration of war mobilized millions of men eligible for military service, but the war also had a significant impact on American women. Women enlisted in the military as nurses and support staff, organized charitable efforts on the home front to benefit troops abroad, and joined the workforce in droves to fill positions previously held by men. This blog post will focus on Georgia women (including a few Oakland residents) who played roles in World War I.

Women in the Military
World War I marked the first conflict where American women were allowed to enlist in the armed forces. The U.S. Navy became the first branch to allow women within its ranks, followed by the Marine Corps and the Coast Guard. The U.S. Army accepted women into the Army Nursing Corp (established in 1901), but these women were not considered officers or enlisted personnel. Thousands of professionally-trained nurses were recruited by the American Red Cross to serve. Overall, more than 33,000 women served as nurses and support staff in the military. Women from around Georgia received training at one of the state’s many military camps. Camp Gordon, a 2,400-acre training camp in Chamblee that essentially transformed into a “war city” for more than 46,000 troops at its height, became a temporary home for many Atlanta women, including the nurses of Base Hospital 43.

In August 1917, the men and women of Base Hospital 43 were called into federal service. The unit staff of army doctors, pharmacists, and nurses included 71 women, many of whom were recruited from Emory University and Emory Hospital. Many of the “Emory Unit” nurses trained and graduated from schools like Grady Hospital School of Nursing, Wesley Memorial Hospital, and the Piedmont Sanitarium. Led by Chief Nurse Caroline S. Dantzler, the nurses sailed to Le Havre, France in July 1918 and made their way to the city of Blois to provide patient care.

In their grey cotton uniforms and caps, the Emory Unit nurses relieved the nurses of Base Hospital 47 (California). Base Hospital 43 occupied seven buildings and their facilities could hold up to 1400 beds. Each nurse was assigned a caseload of ten beds and helped to treat wounded soldiers brought in from the front on hospital trains. During six months and 18 days of service, the Emory Unity nurses treated more than 9000 patients.

Base Hospital 43 was officially relieved on January 21, 1919. The nurses left France in February 1919 and returned back to Atlanta, where they were met at the train station by a military band. Records show that only one nurse from the Emory Unit died serving overseas. Camille Louise O’Brien died on April 18, 1919 – most likely in an accident. Records of the US Army Nursing Corps show that 136 nurses died serving overseas, but none due to enemy fire.

Women as Volunteers
Although many women joined branches of the armed forces, the majority of female involvement was focused on volunteer organizations that supported the war effort. Woman’s clubs grew in popularity during the Progressive Era and provided opportunities for women to support the troops overseas and families at home. During World War I, club women knitted socks, rolled bandages, worked with the Red Cross, hosted social programs for soldiers, and raised funds for the war.

The Atlanta Women’s Club (founded in 1895 by Oakland resident Rebecca Douglas Lowe) shifted their focus on education reform and ending the convict leasing system to war-related efforts. The club worked painstakingly to improve the situations for American soldiers serving abroad, sold war bonds, and prepared medical kits. The National Association of Colored Women’s Clubs (NACWC) was another organization that was very active during the Great War and beyond. This group was a national umbrella group for regional and local clubs. The NACWC raised over $5 million in war bonds, but also fought for suffrage and social services. These women combated racism and other social issues that African Americans faced.

When war broke out, Mildred stepped into a leadership role. She was a founding member and chair of the Women’s Council of National Defense, Georgia Division. The organization called upon members to evaluate nursing resources, encourage women to sign up for the United States Nurses’ Reserve, and increase hospital training school facilities. The Women’s Council advocated for food conservation, encouraged new public health measures, and supported child welfare programs. The council also called on women to encourage their husbands, fathers, brothers and friends to register for the draft. Mildred wrote articles for the newspaper and the Women’s Council newsletter that included suggestions to help the war effort. She encouraged civilians, especially women, to join the Red Cross and plant family gardens. Inman was also appointed Vice Chair of the Georgia Council of National Defense, an organization chaired by Governor Hugh Dorsey.

Mildred inspired other prominent women in Atlanta society to dedicate their time and resources to support the war effort. Her niece, Emily MacDougald Inman (Emily’s family home with husband Edward Hamilton Inman Sr. is the Swan House, an Atlanta landmark) and her mother Emily Fitten MacDougald were also heavily involved in the Women’s Council.

Women Join the Workforce
During World War I, women entered the work force in unprecedented numbers. Conscription caused a labor shortage and thousands of women were needed to fill open positions in the work force. Women were needed to produce food, uniforms, and weapons for the military and the civilian population. These ladies took jobs on farms, in factories, building ships in shipyards, and doing clerical work in offices. They found jobs in mining, running street cars, conducting trains, delivering mail, and manufacturing chemicals. In some wartime industries, female employment increased from negligible pre-war numbers to 19 percent in 1918. At the end of WWI, women made up about 20 percent of the labor force in all manufacturing industries in the U.S.

Georgia’s textile industry was one industry heavily impacted by the war. Many Georgia mills were awarded government contracts to satisfy the high demand for uniforms and bandage. Many men were drafted to fight, which caused labor shortages as the workloads increased. This allowed women to step into roles that had previously been barred to them. Many women also had to begin work to support their families as their husbands were sent overseas.

The work that Mildred Inman and other women did was crucial for the war effort. So many women proved their independence, drive, and work ethic during this time. The small independence that women gained during World War I played a huge role in the fight for suffrage. Many of these women became strong activists for suffrage, having tasted what independence and some authority felt like excelling at the tasks that they took on. The war helped to serve as a catalyst for suffragette extension in the United States. During World War I, many women proved in a big way not only to themselves but also to the world that they were capable of great things outside of the home. Not only could women do men’s work, they proved that they could do it successfully.