Alonzo Lampkin was a member of Georgia Tech’s Class of 1915.

Alonzo Church Lampkin, Jr. was born in Atlanta on March 3, 1894, to Alonzo and Minnie Lampkin. Alonzo Sr. was a prominent figure in business and civic life in Atlanta. He was listed as a grocer in the 1900 census, and later worked as a real estate agent. Minnie Wiley Lampkin descended from a family of Atlanta pioneers. Alonzo and his siblings, Ruth and Susie, grew up on Hunnicutt Street in the Sixth Ward before moving to 630 West Peachtree Street.
Alonzo Lampkin was accepted into Georgia Tech in 1911. He joined the Gamma Alpha chapter of Sigma Nu, one of Tech’s oldest fraternities. Two months before Alonzo’s 22nd birthday, his father died following a brief illness brought on by an attack of apoplexy. Alonzo Sr.’s illness was widely reported by the Atlanta Constitution, which also published his obituary. Alonzo continued to support his family following his father’s passing.
In the months following the U.S entry into WWI, Lampkin enlisted in the U.S. Army and was assigned to the 82nd division. Nicknamed the “All American Division,” the men of the 82nd hailed from Georgia, Alabama, and Tennessee. In September 1917 Lampkin and thousands of other Atlanta recruits were ordered to report for training. Departing soldiers were treated to a barbeque on Hemphill Avenue. The menu included everything from “Brunswick stew to cued lamb, pig, beef plats, and many other edibles.” Following the meal, the troops were transported by Southern Railroad trains to Camp Gordon in Chamblee. Camp Gordon was one of 16 National Army Training Camps established in preparation of the U.S. entry into war. The camp covered 2,400 acres and could hold up to 47,000 troops. The camp was abandoned in 1920, and later became the site of the Peachtree-DeKalb Airport. 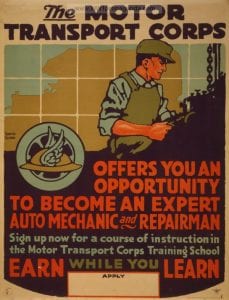 Lampkin served in the Motor Transport Corps, which was tasked with supervising all motor vehicles for the military. He quickly moved up the ranks. Lampkin became a lieutenant in April 1918 and was later promoted to captain in October 1918. The 82nd Division began sending troops overseas in April 1918. Prior to his departure, Lampkin married Martha Brown Edmondson, a southern debutante from Anniston, Alabama.
Lampkin’s division joined the St. Mihiel Offensive in mid-September and participated in the Meuse-Argonne Offensive in October. Captain Lampkin was stationed in France when the war ended on November 11, 1918. He returned to the states in May 1919 and was honorably discharged on October 13, 1919.
At some point following his return, Captain Lampkin and Martha divorced. In 1925 he remarried Elizabeth Smith in Petersburg, Virginia. The 1940 census shows the couple and three daughters (Barbara, Elizabeth, and Patricia) living in Marietta. Captain Lampkin listed his profession as a traveling furniture salesman. Alonzo C. Lampkin died on March 31, 1958. He was laid to rest in Oakland Cemetery in the Wiley family lot, next to his parents.

U.S. News ranks us #7 in their best things to do in Atlanta list! Creative Loafing named us best "picnic spot" in its 2019 Best of Atlanta roundup. Plan your visit today!