By Marcy Breffle, Education Coordinator
Beginning in April 2017 and through Nov. 11, 2018 – the centennial of the WWI armistice – HOF will recognize the Oakland residents who served in World War I in a new blog series, “Oakland Remembers World War I.”
In the third installment of our blog series, we recognize First Lieutenant Y. Lyons Joel. 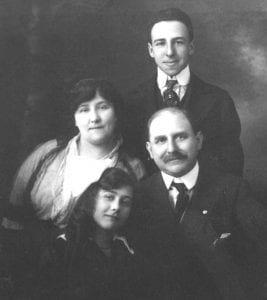 Yoel Lyons Joel was born in Atlanta on August 20, 1896. He grew up in a house on 14th Street, where he lived with his sister Helene and parents, Lyons and Rachel. The elder Joel co-owned the Bass Dry Goods Company on Mitchell Street. The family attended worship services at the Temple, which moved to a building at Pryor and Richardson Streets (near where Turner Field stands) in 1902. Young Joel attended school in Atlanta and then enrolled at the University of Georgia.
Called into active service in August 1917, Joel trained at Fort McPherson in Atlanta. He was assigned to the 328th Infantry regiment, 82nd Division at Camp Gordon and later promoted to first lieutenant in February 1918. That spring the 82nd Division shipped out to the Western Front. Frank Alexander Holden, one of Joel’s fellow soldiers, recalled the departure in his 1922 memoir, War Memories. Holden writes”

“As we were marching away to board the train for embarkation I saw Mr. and Mrs. L.B. Joel, of Atlanta, Ga., waving a last good-bye to their only boy, Lieutenant Y. Lyons Joel, one of the last lieutenants in my company. It was really a last good-bye, because their brave boy never recovered from a wound received in the Argonne.” 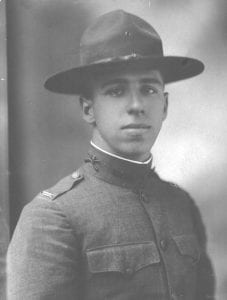 The 82nd Division traveled to Liverpool, England, and then on to France to gain combat experience at the St. Valery-sur-Somme training area. The division relieved the 2nd Division in the Marbache Sector in August, and then joined the St. Mihiel offensive in mid-September. In early October the division prepared to take part in the final Allied offensive of the war. The Meuse-Argonne Offensive, also known as the Battle of the Argonne Forest, is often considered the bloodiest battle in American history.
On October 14 the 82nd Division advanced its line up the St. Georges-St. Juvin Road north of Sommerance, France. A determined counterattack of heavy artillery, machine gun fire, and gas forced soldiers to take cover in foxholes, and the division suffered many casualties. Joel was called upon to take two H Company platoons forward. While leading his men against German positions in the Argonne, Joel was severely wounded by shrapnel and taken to a base hospital for treatment.
Joel’s parents were notified of his wounds and they immediately requested passports for France from the War Department. Unfortunately their passport request came through too late. Lieutenant Joel died on December 12, 1918. He was buried at the American Cemetery in Nantes, and his body was later brought over and buried at Oakland Cemetery. The Joel family vault is located in Oakland’s Jewish Flat section.
Joel was posthumously cited for his bravery. His citation reads:

“His personal example of bravery inspired his men to make an effort which resulted in a successful advance, although he lost his life in the performance of this duty. The commanding general takes particular pride in announcing to the command these fine examples of courage and self-sacrifice. Such deeds are evidence of that spirit of heroism which is innate in the highest type of the American soldier and responds unfailingly to the call of duty, wherever or whenever it may come.”

U.S. News ranks us #7 in their best things to do in Atlanta list! Creative Loafing named us best "picnic spot" in its 2019 Best of Atlanta roundup. Plan your visit today!