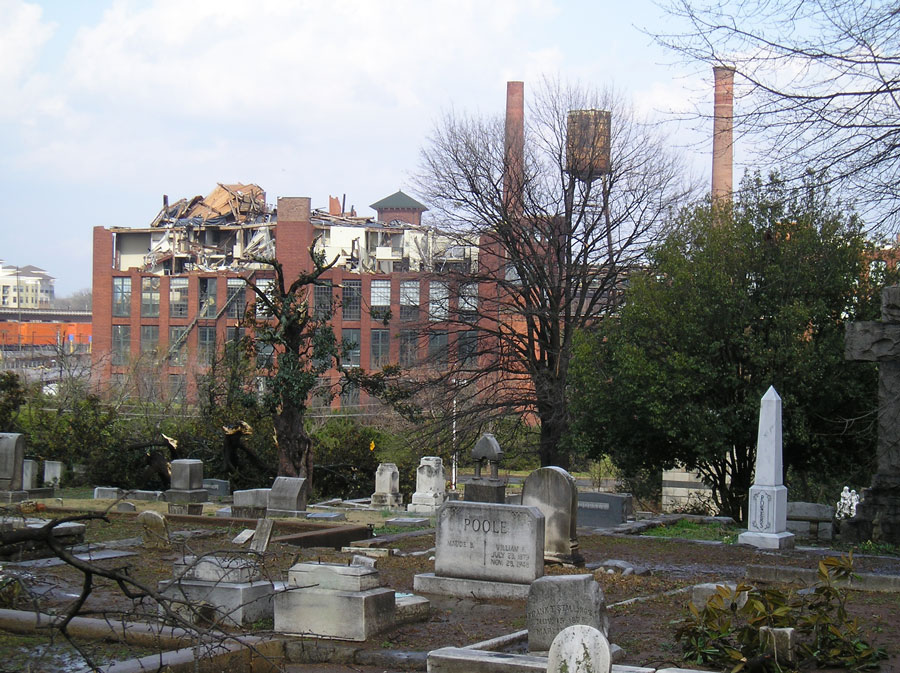 On a proverbial “dark and stormy night,” I was watching the SEC Championship basketball tournament when tornado warnings began to stream across the bottom of the screen. Simultaneously, play was stopped on the court at the Georgia Dome as players, coaches and fans looked up at the swaying light fixtures and what appeared to be a hole in the fabric roof. Then the phone rang. Somehow, I knew something terrible had occurred at Oakland Cemetery. It was our Sexton, Sam Reed, who having left his keys in the Visitor Center, came back moments before the EF2 tornado made its way from downtown and passed over Oakland. Sam said, “I hit the floor as soon as I got in the door.” I asked Sam how bad it was and he said, “Really bad!” Later, Historic Oakland Foundation (HOF) board chair May B. Hollis would remark, “It was like Gone with the Wind meets The Wizard of Oz.”

That was ten years ago. Today, you have to look very closely at Oakland’s landscape to detect remnants of the devastation that caused the loss of over a hundred trees and damaged hundreds of tombstones, monuments, and retaining walls. The day after the storm, HOF’s Restoration Director, Kevin Kuharic, made his way through the tangled limbs, downed trees and broken tombstones. The damage grounds were so disorienting that Kevin remembers, “I didn’t know where I was!” Remarkably, a crowd of people holding rakes, brooms, and shovels were at Oakland’s gates willing to do whatever they could to begin the cleanup. That’s when Kevin knew it was going to be all right.

The Atlanta tornado brought out the best in our community, those who cared about this place we call an irreplaceable landmark and Atlanta’s last tangible link to her past.

The Atlanta tornado brought out the best in our community, those who cared about this place we call an irreplaceable landmark and Atlanta’s last tangible link to her past. For the next year and a half, Historic Oakland Foundation worked with the City of Atlanta, Georgia’s Emergency Management Agency, the State Historic Preservation Office, and thousands of volunteers and contactors who contributed money, time and talent to rebuild and restore Oakland piece by piece and brick by brick. I remember a statue of Gabriel being hoisted by a crane and returned to his perch atop the Joseph Emerson Brown monument. I watched archeologists combing through root balls in search of human remains that may have been disturbed. And I marveled at the exuberance and dexterity of the Georgia Department of Corrections prisoners who were deployed here to chop, cut, drag and haul away thousands of pounds of limbs and debris.

On the one-year anniversary of the storm, we invited the Atlanta community to join us for a ceremony to bless and reconsecrate the grounds. A priest, a rabbi, and a pastor (no jokes, please!) from local area churches conducted the ceremony on North Public Grounds.

Almost lost to years of abandonment and neglect, Oakland Cemetery was perilously close to being swept away by nature’s fury on this day in 2008. But our city rallied around her and now this fragile reminder of who we were remains as a lasting reminder of who we are.