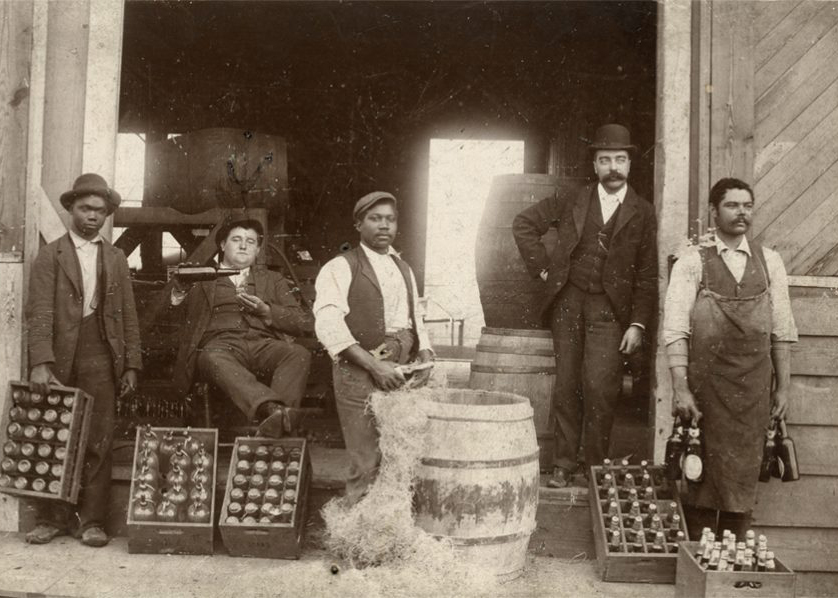 Ales, lagers, IPAs, stouts, porters, and sours – Atlantans love their beer. There may be a new brewery popping up every month, but Atlanta’s love of brewing and all-things-beer goes back centuries. Read on for a few facts about Atlanta beer and brewing.

Frontier Beer
Beer in the frontier days in Georgia was very different from beer today. Men and women made beer at home, using any fermentable substance they could find – corn, persimmons, molasses, and squash. Hops, the flower of the Humulus Lupulus plant, were rare. Herbs, juniper tips, and sassafras were used to flavor and season beer. One of the few places you could get a beer outside of the home was at a tavern or saloon.

Atlanta’s First Tavern and Saloon
The first tavern in the area that would become Atlanta was Whitehall Tavern. Located near the modern-day intersection of Lee Street and Ralph David Abernathy Boulevard, the tavern served food and drinks to travelers and new settlers. Whitehall Tavern was also an inn, a stagecoach stop, a post office, and a mustering area from the local militia.

Moses Formwalt opened the first Atlanta saloon in 1847. A member of the Free and Rowdy political party, Formwalt served as the first mayor of Atlanta. Within forty years, there were more than a hundred operating saloons in Atlanta. These saloons did more than $2 million in annual business.

Prohibition
At the stroke of midnight on January 1, 1908, Georgia became a dry state. The state legislature passed a mandatory statewide prohibition in 1908, more than a decade before the Eighteenth Amendment banned the production, importation, transportation, and sale of alcoholic beverages across the nation. Georgia was one of the first southern states to pass such a law.

The illustration to the left comes from a 1908 issue of Puck, a political satire and humor magazine. Titled “Marching Through Georgia,” the illustration shows a group of prohibition supporters. Men and women march under such banners as “The Lips That Touch Corn Likker Shall Never Touch Ourn”, “W.C.T.U.”, and “Carrie Nation Cadets”, with one man carrying a small barrel labeled “Vegetable Tonic”, and a large wagon labeled “Water Wagon No. 1” immediately behind the leaders, to show their support for prohibition.

Despite their win in 1908, prohibitionists had a hard time keeping Atlanta dry. “Near beer,” a non-intoxicating variety of a lager beer, became popular. Made available through a legal loophole, near beer was defined as “any and all of that class of malt liquors which contains so little alcohol that they will not produce intoxication, even though drunk to excess.”

To learn more about Atlanta’s long brewing history, join us for a Malts and Vaults: Where Beer Meets History tour or pick up 101 Things To Do With Beer in our online shop.  You can also read Atlanta Beer: A Heady History of Brewing in the Hub of the South from our friends Ron Smith and Mary Boyle!