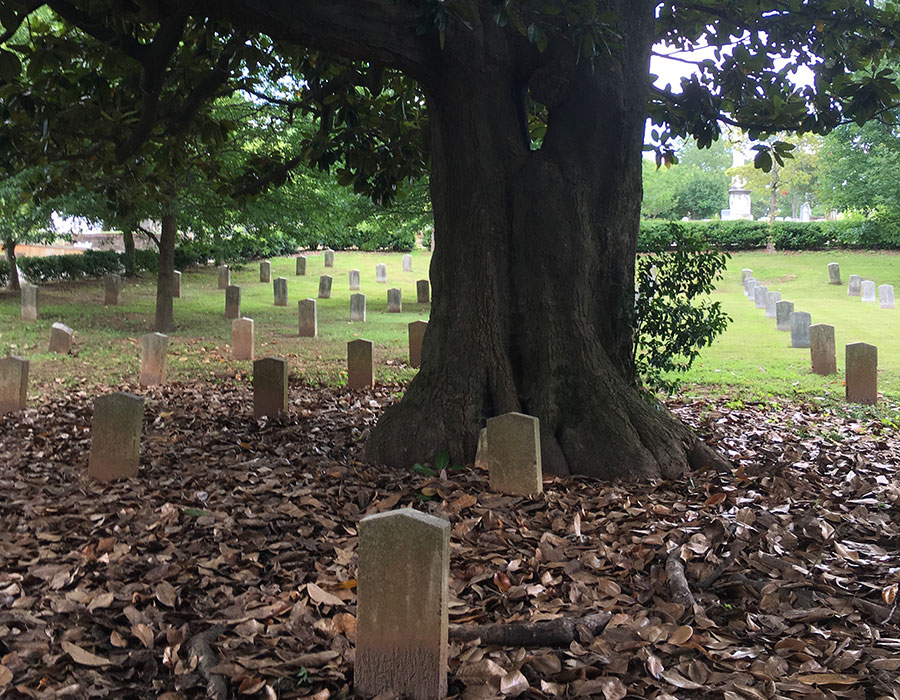 It is easy to simply take Oakland’s majestic trees for granted. Yes, they give so much: cooling shade, bird perches, oxygen cleaned of pollutants, and suffuse the grounds with a light perfume when in bloom. Many of the largest trees, from dominating Southern magnolias to towering oaks, distinctly shape the aesthetic experience of many areas of the cemetery. Yet they have human tales to tell – of a greedy sexton and a defiant lady, of mourning family, of honoring family through creating beauty. 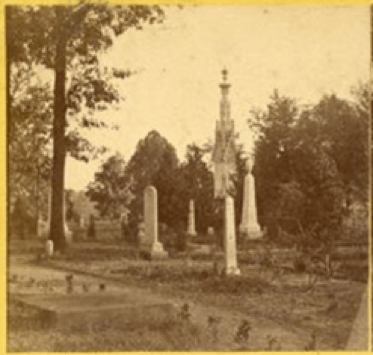 The “forest oaks” of the original cemetery inspired the City Council to bequeath Oakland its name. In the Committee on Cemetery’s Annual Report for 1872 presented to the City Council, the chairman concluded,

“In all cities of any note, and in some much smaller than ours, when their cemeteries probably have not reached as high a state of cultivation and improvement, they have thought it right and proper to name them, and in closing this, our annual report we think it appropriate to recommend a name for ours, and thereby suggest that hereafter it be known and called Oakland Cemetery.”

These mature trees dominated the landscape of the Original Six Acres, providing a canopy backdrop to a number of early stereoviews taken in Oakland in the 1870s and early 1880s.

The mature canopy oaks of the Original Six Acres were in strong contrast to much of the land purchased in the late 1860s when the City expanded the cemetery. Images taken a few years after the expansion reveal wide open, overgrown fields, with newly-planted shrubs and trees. Areas that were particularly open field terrain were the area just north of the Original Six Acres (from Maynard Jackson to Margaret Mitchell); the north half and east end of the Confederate Burial Grounds; and the hilly east section of the cemetery from the Confederate Grounds to Boulevard. By photographs dating to the 1890s, sizeable but young canopy trees – oaks, red cedars, magnolias, and unidentifiable others – are in full view.

Less common canopy trees grew within Oakland’s woodland. One melancholy writer noted in 1890, “Yonder is a small square space; hedged in by closely cropped evergreens, lie the bones of one of Georgia’s grandest sons. Not even so much as a slab marks the spot, and only an ungainly black-jack tree raises its gnarled stem above that eloquent voice.” Blackjack oaks are of smaller stature than other oaks and grow along the length of the eastern seaboard, but are not a tree one would expect to find today in a city.

Oakland’s namesake large oak trees attracted bad attention as well as good. A report by a special committee convened by the Atlanta City Council spells out in disbelief actions of a greedy sexton and hints at the backbone of one of Atlanta’s leading ladies of her day.

In the mid-1890s (1893-1896) among numerous other professional transgressions, Sexton T.A. Clayton cut down over 40 mature canopy oaks for his own personal use as firewood. He tried repeatedly to get Mrs. Capt. Fanny Milledge, president of the Ladies Memorial Association, to grant him permission to cut down all the oaks in the Confederate Burial Grounds, which she steadfastly refused to grant. If Clayton had thought magnolias made good firewood, they’d probably be gone from the cemetery as well – such as the massive specimen near the southwest corner of the cemetery, near the main gate. One early stereoview, thought to date to the 1870s, illustrates how wooded the Original Six Acres was at Oakland’s establishment. Images taken through the main gate in the early 1900s show a very open landscape with few trees, the legacy of Clayton’s firewood project. 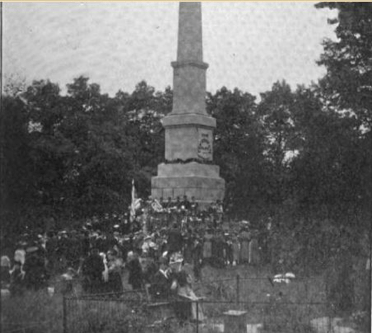 Today some of the largest hardwood trees are in the Bobby Jones area adjacent to the south section of the Confederate Burial Grounds, near the Memorial Drive wall. Early photographs of the dedication of the Obelisk in 1874 show this area of the cemetery to be heavily wooded, and later photographs suggest the area remained wooded through the end of the 1800s. Thus, these very large oaks near what was once a dry creek bed may indeed be quite old, having eluded Sexton Clayton’s axe.

In response to Sexton Clayton’s deforestation, the succeeding sexton and the Committee on Cemetery went on a major tree planting effort from 1896 through 1898. Sexton Clarence Stephens and his crew planted nearly 700 trees, primarily water and turkey oaks, focusing on lining the main drives in the cemetery. The towering oaks growing today in the Original Six Acres along the Hunter Street Drive are likely the progeny of this project to re-establish and re-assert Oakland’s signature tree.

Yet evergreens were very popular and widely planted by families in Oakland’s halcyon years of the 1870s to the early 20th century. Local nurserymen advertised evergreen trees for cemetery planting. Red cedars, arborvitae, deodar cedar, and other conifer evergreens were sold and appear in photographs of Oakland dating to the 1880s and 1890s. But the southern magnolia seems to have held pride of place, if the newspaper articles of the day are anything to go by. Writers often took care to specifically mention the southern magnolias planted in the cemetery. In a letter to The Constitution in 1875, a visitor to Oakland opined, “The blue-grass and different evergreens – including especially the majestic and graceful magnolia – seem to luxuriate in their green, fresh and healthy magnificence.”

Too, there is evidence of a brother planting an early magnolia in the Confederate Burial Grounds for his brother, Private Weakly, in 1885; this tree still stands today. The largest southern magnolia in the grounds (dubbed “The General”) was given a memorial service at its passing in 1998. “The General” likely was one of the earliest planted trees of the many beautification projects the Atlanta Ladies Memorial Association (ALMA) oversaw; the largest such project, which specifically included magnolias, was in the spring of 1888.

Families likely brought in the magnolias in the east end of the cemetery, as early photographs show this area was wide open fields in the early 1880s. Other magnolias on the grounds appear in early photographs, such as the trees near the Kiser mausoleum. An 1898 photograph in Hand Book of the City of Atlanta looking west towards the Confederate Grounds clearly shows some of our now-large magnolias in their younger days. A pair of family-planted magnolias bookends the Oliver family lot (1.0.129), framing the headstone of Mrs. C.E. Oliver. Mrs. Oliver passed away in 1878, while her husband, John S., passed away in 1894. 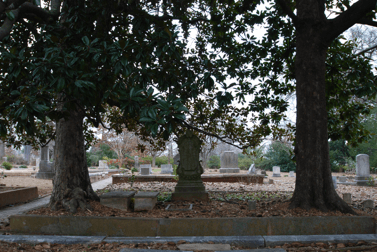 Ornamental trees have also graced Oakland’s grounds. An article in The Constitution in 1878 poetically describes the winds blowing sweet requiems for the dead through the oaks, willows, and evergreens. Willows, with their weeping growth habit, were a Victorian favorite tree of mourning. Weeping trees were also planted at Westview Cemetery in the mid-1880s, as “weeping birches, willows, elm, and other rare trees” were set out in the undulating lawns.

This symbolism of sorrow was poignantly conveyed in an 1890 newspaper article written by a visitor to Oakland. Given a private walk at night with the night watchman, at one point he observed “A little farther on a sad-looking willow overhangs the flower-strewn mound that covers a young husband’s love. A beautiful bride, whose honeymoon was not yet passed was buried there years and years ago. ‘The tree was planted there when she died…. That was years ago. Every day the sorrowing husband, now grown gray, comes out here to lay at his young bride’s side fragrant, fresh flowers, that she loved so much.’ Beneath the willow stood a well-worn rustic bench, marked and eaten by the touch of time.”

The best-documented landscape history for Oakland is that of the Ladies Memorial Association beautifying the Confederate Grounds. As early as 1888 the Ladies were purchasing “ornamental trees;” an article in The Constitution in 1892 mentions the graves of the Confederates lying under the weeping willows. The Ladies augmented the collection of ornamentals again in 1894 when they purchased 21 crabapple trees to be planted by the sexton’s crew. The Ladies also planted dogwoods; the first itemized purchase of dogwood trees was in 1904, and the last in 1942, although it seems reasonable the Ladies planted dogwoods in 1888. Many of these dogwoods were planted to encircle the Confederate Grounds. In the late 1990s, a volunteer group planted 55 dogwoods to replace those trees that had succumbed to old age.

By the late 20th century, Oakland’s tree canopy was being lost to old age and disease.

By the late 20th century, Oakland’s tree canopy was being lost to old age and disease. In 1975 Sexton Ed Walters bemoaned the loss the cemetery’s elms, oaks, and cedars, and that no new trees were being brought on to replace them. He issued a request to Atlanta’s gardeners for donations of trees, primarily magnolias, and oaks, along with evergreens, dogwoods, crepe myrtle, and ginkgos. A number of these trees are now of some size across the grounds.

Understanding and protecting these living legacies of history and remembrance requires basic information. To that end, a tree inventory across the cemetery has been underway by and is nearing completion. Conducted by ArborGuard Inc., and Historic Oakland Foundation garden volunteers, every tree has been located, identified, numbered and given a tag; the larger trees were also measured and latitude-longitude coordinate located for future GIS mapping.

The Oakland Tree Care Fund has been established to help with the long-term preservation of these living memorials. Monies raised are used primarily for soil treatments to bring back beneficial soil microbes. These assist the trees’ nutrient uptake, offsetting years of erosion and lack of mulch, and provide relief within a year or two to stressed trees. Lightning rod systems have been installed only in a small handful of the signature southern magnolias. Due to their high costs, these measures have only benefitted the canopy trees at greatest risk.

In 2017 the Foundation’s garden staff launched a concerted effort to mulch the heirloom trees within Oakland’s restored areas, focusing on the southern magnolias in the Original Six Acres. ArborGuard donated wood chips, and volunteer groups moved and spread the mulch. In addition to retaining soil moisture, of critical importance in drought summers, the mulch starts the process of bringing microbes and nutrients back to the soil, but it is a long-term process.

The trees may be silent, but they do bear witness to the people and events that have shaped Oakland as we know and experience it today.

You can help us care for our memorial trees and the rest of our tree canopy by donating to our Tree Canopy Fund. Learn more.

Sara Van Beck is a member of Historic Oakland Foundation’s gardens team. She is a leading daffodil authority and author of Daffodils in American Gardens: 1733-1940.