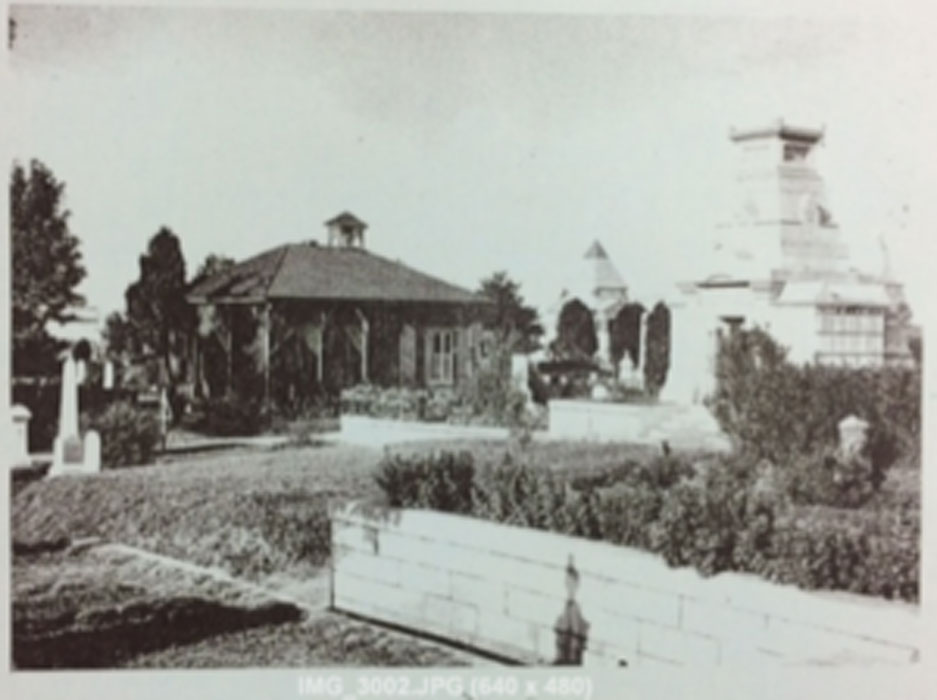 In Oakland’s early halcyon days of the 1870s and 1880s, neatly trimmed hedges of geometric perfection were de rigueur. Soon after Oakland expanded in the late 1860s, families began planting hedges and evergreens. By the mid-1880s, elaborate lot designs of exacting precision stood out, even in the hazy distance of stereoview photographs.

A Shift in Taste

However, as Oakland’s families tended their hedges, the aesthetic preferences of the national tastemakers were strongly shifting to the new “landscape lawn” or “park cemetery” design. This new design, intended to create a “park-like” effect, dictated expansive swaths of lawn thoughtfully accented by trees, with limited clumps of tasteful shrubbery (evergreens usually), flowering shrubs, and perennials. Lots were to be demarcated by small stones set in the lawn, and the headstones were to be low and inconspicuous, with only a large family monument in the center. Fences of all sorts, suggestive of insecurity and social exclusiveness, were to be banished, as they were seen as blots on the face of nature.

Adolph Strauch first introduced this lawn system at Cincinnati’s Spring Grove Cemetery in 1855, but it wasn’t until the 1870s and early 1880s that it gained wide traction in the national literature (partly fueled by the 1869 publication of Spring Grove Cemetery, Its History and Improvements).

Westview Cemetery, established in 1884 on Atlanta’s West Side, adopted this new lawn design at its outset, creating wide-open vistas and strict guidelines for headstone designs, placement of markers and mausoleums, and banishment of those offending fences. Unsurprisingly, one of Atlanta’s largest nurserymen advertised in The Constitution in March 1883 that he now had on staff, “a competent landscape gardener, who will make plans of private places, public parks, and cemeteries, and execute them in the best manner known to the art, either in Atlanta or abroad.”

Oakland’s rectangular block and lot system was not in the least conducive to this new system of sweeping vistas designed with aesthetic restraint. Its strongly curving roads were problematic as well, never mind the existing plethora of tall individual grave markers. Further, the City sold the land as an outright real estate transaction, so 30 years of families tending their loved ones as they deemed appropriate (be it with fences, stonework, or shrubbery) was not going to be readily changed by a city employee’s notion of fashionable good taste.

Fortuitously, some landscape designers on the national stage acknowledged that many families of means were cognizant of the new aesthetic but already owned family lots laid out under the old ways. Their family lots may have been purchased in older cemeteries such as Oakland, have already been landscaped in the old fashion of enclosing hedges and specimen evergreens, or have stone walls or iron fencing that they were loath to remove.

Samuel Parsons, Jr., the leading parks superintendent in the country, published Landscape Gardening in 1891, a touchstone work on landscape design, with a strong emphasis on public spaces. Before closing his work, Parsons kindly guided his readers in this predicament in strategies to adapt their old landscaped family grounds to the new, open aesthetic. Acknowledging some families may not wish to completely destroy their existing evergreen hedges, he recommended leaving an evergreen in each lot corner and on either side of the entrance gate. Otherwise, Parsons directed, the lot should be an open, perfect greensward of lawn, save the edges of the lot and at the head and foot of the graves. A foliage border around the lot should be planted, to soften the visual stiffness of iron fencing. For this Parsons suggested dwarf evergreens with a careful eye to incorporating variation in foliage coloration, as “variety of color is too little considered in most landscape gardening of a permanent character.” Lastly, he suggested a vine or two to entwine the base of gravestones or monuments, taking care to not let the foliage cover the stonework.

Historic photographs of Oakland from the 1890s and early 1900s reveal this shift in taste towards the open landscape designs of the lawn aesthetic. However, this change of Oakland’s landscape from one dominated by strong geometric clipped hedges and accenting evergreens to a softer garden motif of a more open design was likely hastened by a confluence of disparate events, along with a desire to stay au currant with new cemetery fashions.

A Changing Landscape
In the winter of 1893-1894, severe cold killed many of Oakland’s renowned hedges. The City Council Committee on Cemetery’s 1894 Annual Report noted the extent of the damage, likely as it required a substantial amount of cemetery staff time to remove the dead shrubbery. After the severe cold, Sexton Clayton unilaterally destroyed many family hedges during his tenure from 1893 to 1896. The families’ vociferous protests was one of the many reasons listed for Clayton’s dismissal in 1896. Finally, in 1896 families were watching the construction of the brick wall around the perimeter of the cemetery. Many liked the look so much they, too, began building retaining walls around their lots. The city thought this was a fine idea, as when the new lot walls were backfilled, there were suddenly a few new grave plots to sell.

As a result of the loss of hedges, the new walls and expanded lot space, many families (one way or another, by choice or by fate) had a new “blank slate” to garden. Some family gardeners stayed with the old motif of an encompassing border hedge. Many who had lots bordering main drives planted a border hedge along the drive, establishing a barrier between the public drive and their private burial space. Some erected wrought iron fencing atop their new walls.

Other family gardeners embraced the new tastes in cemetery design to varying degrees. Some were quite restrained, holding close to the dictates of the lawn aesthetic. One 1894 photograph particularly illustrates how one family accomplished this with an open grassed lot, one strategically placed ornamental tree artistically pruned, and strong use of urns to hold flowers. Only one grave seems to have flowers planted on it, which may have been a shrub.

Other photographs from the early 1900s depict open landscapes with tastefully planted single flower shrubs (perhaps roses) and rose trellises. Also, some mausoleums were very restrained in their horticultural ornamentation, such as an 1895 photograph of the Kiser mausoleum with a simple rose in the front. Lots to its side and rear, however, were planted with low hedges.

Other photographs portray families who felt gardening exuberance was the order of the day. One circa 1907 postcard showcases a lot near the South Public Grounds and Memorial Drive. Not content with an old-fashioned evergreen, this lot boasts a grand banana tree (a Victorian favorite for its exotic foliage) ornaments; a lot border of roses and other perennials and an unidentified low; and a mounding perennial border of soft foliage. The center of the lot is open, presumably planted in grass. In the background an array of other ornamental plants and shrubs crowd the view across the distant lots, shaded by a veritable arboretum of trees.

Another family stayed with densely planted hedges, evergreen shrubbery, and flowering perennials. Their lot, located in the northwest area of the cemetery near the Gov. Brown monument, caught a professional photographer’s eye for a stereoview taken in the mid-1890s. Large evergreens and other mature shrubs remain in the far corners and the center of the lot, belying an array of specimen plants. Smaller, softer foliage plants are planted along the iron railings in the foreground, softening the fence line. Graves in the middle of the lot have been overplanted with a large number of small plants, as yet unidentified.

Families Push Back
Oakland families’ refusal to yield to the City’s imposition of design mandates came front and center in 1907. A new Cemetery Commission had been appointed by City Council, and its chair was determined to address Oakland’s woeful maintenance needs and impose the modern lawn design. Councilman Taylor’s new rules and regulations for Oakland included banning new stonework, prohibiting tree and shrub plantings, and removing existing walls over time. Oakland’s families were none too pleased, forcing the City to backtrack on its modernization efforts. Family lot owners rebelling against the effort even made it to the preeminent national publication, Park and Cemetery, and Landscape Gardening.

Today Oakland’s gardens reflect these varying landscape motifs and families’ design tastes over the decades. Plants of the period, as documented in newspaper articles and Atlanta nurserymens’ catalogs, are used in lot recreations as well as in new designs inspired by period photographs. One such recreated lot relies upon a photograph depicting a design well in keeping with Parsons’ suggestions of low foliage to soften the hard lines of existing lot walls and fences.

Taken around 1894, the lot has one hedge across the back, an expanse of greensward lawn, and a border planting along the lot walls. The back hedge retains the earlier landscape design trimmed hedge motif, as it is taller and the end or corner shrub is clipped to be taller and conical. As chrysanthemums were extremely popular in Atlanta at this time, and have the same growth habit as the plants in the photograph, they were a natural choice. The perennial at the headstone in the lot was not replaced; more headstones were added to the lot after this photograph, so in order to maintain overall lot symmetry and aesthetics, this design element was not replaced.

With the occasional discovery of new period photographs of Oakland and the expansion of restored acreage across the cemetery, it is anticipated additional lot recreations will be possible, continuing the Foundation’s commitment to bringing Oakland’s lost loveliness back to life. 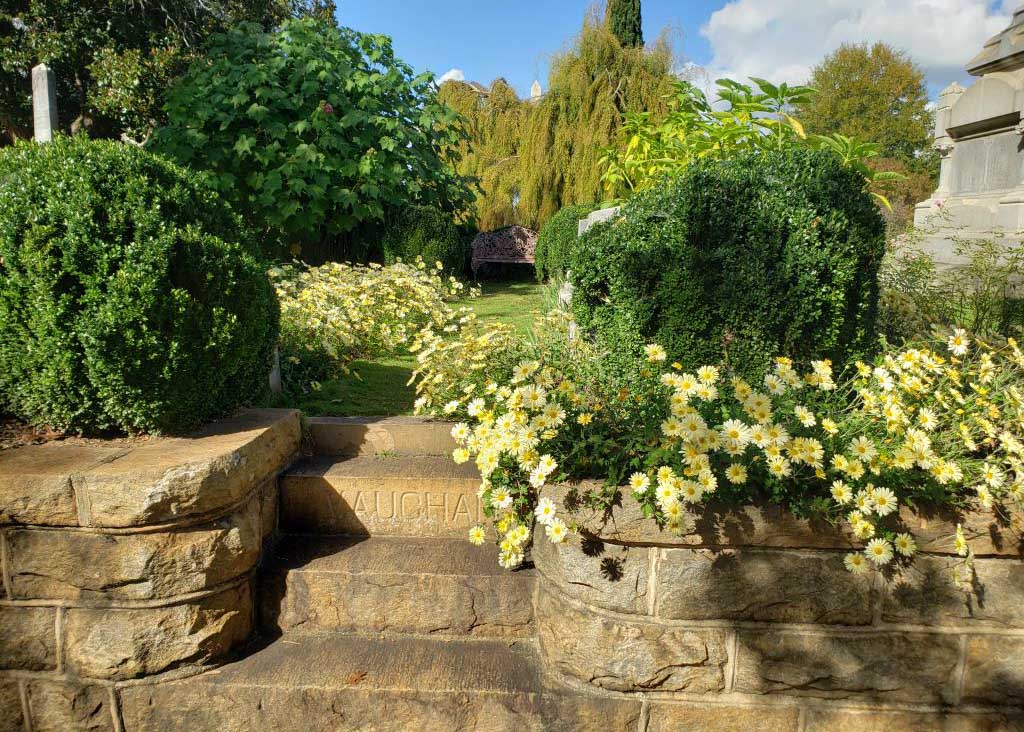