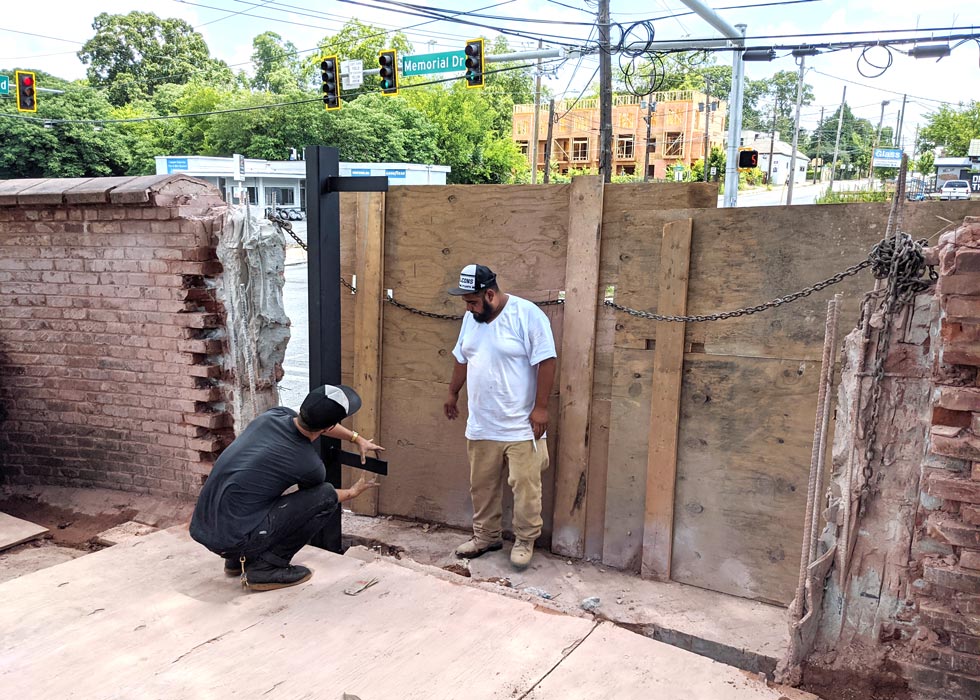 The current restoration of East Hill is one of the largest undertakings in Historic Oakland Foundation’s forty-five years. While most of the work is similar to what we have done in sections like Jewish Hill and the Original Six Acres, East Hill includes the addition of extensive wall work, irrigation installation, and pathway work by seasoned contractors. Recently I sat down Manuel Leija of Fresh Choice Masons to discuss his work and thoughts about Oakland Cemetery.

Manny moved to Atlanta in the late 1980s and began learning the masonry trade while working with this father and other experienced family members. During his free time, Manny enjoyed working on cars and going to car shows. It was at one of those cars shows that he struck up a conversation with Dustin Hornsby, the restoration manager and senior restoration technician at Historic Oakland Foundation. The two talked about current and past car projects, and then Dustin asked what Manny did for a living. When Manny replied “masonry,” Dustin suggested that he come check out some projects at Oakland.

The welcoming nature of today’s Oakland has a lot to do with Manny Leija. His work is often a key component in kicking off a restoration project or in reaching the finish line.

Kevin Kuharic, the preservation director at the time, and Dustin brought Manny in around 2004 to work primarily on dangerous pathways and walls in the Original Six Acres and on Bell Tower Ridge. Manny explained that while HOF’s preservation staff has changed throughout the years, its commitment to detailed restoration work has not. He jokingly mentioned being asked to redo some work because it wasn’t just right. As the years went on, Manny continued his work at Oakland, doing a few walls here and there and eventually gaining the attention of Sexton Sam Reed who suggested Manny and his crews to residents’ families when they needed masonry work. Outside of Oakland Manny continued to grow his masonry business, working on hardscape yards for some of the lavish homes of Buckhead. After the 2008 tornado, Manny was there to help not only with the work but also as a bridge to other specialized contractors that could help with things like crane work.

Now, some twenty years later, Manny has been joined by his son, Robert, who is following in his father’s footsteps as a mason. Together they have worked on everything from small patches of pathway needing attention due to invasive tree roots to installing retaining walls so that a family can fully utilize its lot. When I asked Manny about the changes he has seen over the years here at Oakland, I was surprised to hear that the biggest change he noticed is that Oakland is a lot safer and more welcoming than before. He went on to explain that a large part of arriving in the morning was going around and checking for damage, and he mentioned that in earlier decades he would rarely see people visiting Oakland for enjoyment as they do so often now. The welcoming nature of today’s Oakland has a lot to do with Manny Leija. His work is often a key component in kicking off a restoration project or in reaching the finish line.

The Foundation’s current East Hill Project began with the construction of a pedestrian gate at Memorial Drive and Boulevard, work conducted by Manny and his crews. Manny also made multiple trips to the site to ensure that everything went smoothly when the metal gates arrived and to suggest new and better-looking ways of making things work. We also wanted to run new irrigation lines on East Hill to newly landscaped areas. This meant ripping up and reinstalling historic pathways, both poured and brick. Again, we selected Manny and his crews for the job because of their experience using the materials and because they had done so much previous work at the cemetery. The same goes for wall work: Manny’s crews have the experience at Oakland to know what we want and how we want it, and they can rebuild a wall in less than half the time it would take the preservation team to do it. Manny mentioned that seeing the various types of wall construction and their varying materials at Oakland have helped make him a better stonemason. Plus, he says that being able to mention that he’s helping to restore Oakland Cemetery is a huge boost when discussing new work with potential clients. Manny and his crews are always available to offer advice and lend a helping hand when we need it, and Historic Oakland Foundation is lucky to have him and his expertise.