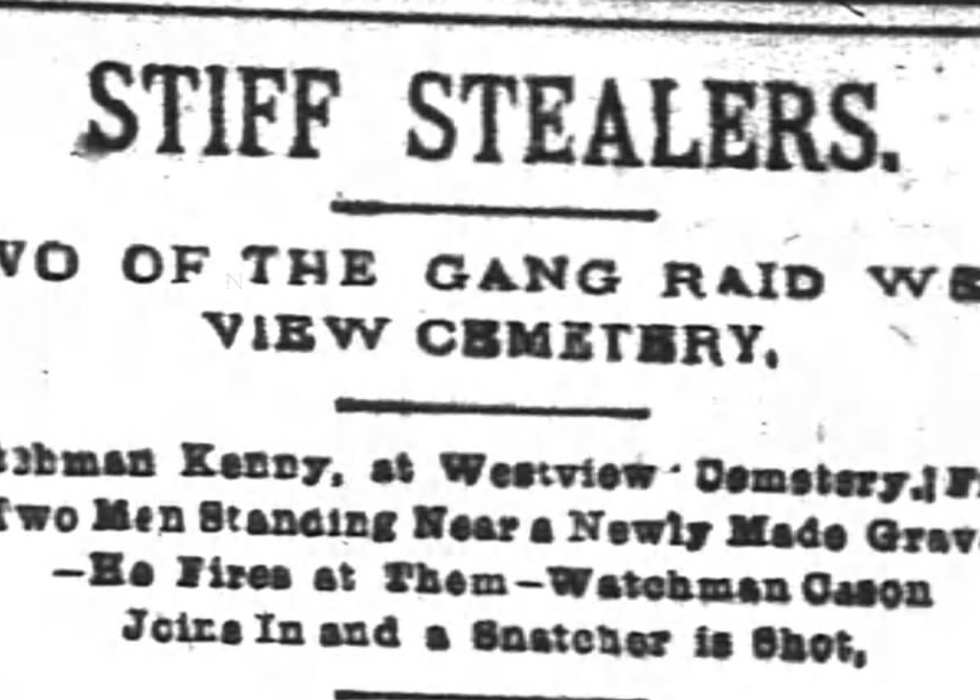 This is the second part of Andrew Bramlett’s article on grave robbing in Georgia. See part 1.

The first major attempted grave robbery at Oakland Cemetery took place after hours on December 22, 1880. Oakland guards Belcher and Hunt approached two men digging in the African American Burial Grounds. The guards fired ten shots at the ghouls (grave robbers), but the men escaped. Although the top layer of dirt was gone, the grave remained intact.

Three months later, the body of Mrs. William Gober was stolen from the Thurman Cemetery, now part of Crest Lawn Memorial Park. The Atlanta Constitution suspected medical students took the body. An article appeared in Chicago Tribune about how Atlanta medical colleges caused many grave robberies, especially at Oakland (March 22, 1881). The Tribune correspondent reported, “The colleges here, while they have been of great pecuniary benefit to Atlanta, are nevertheless objectionable institutions in some respects.”

To protect the bodies of loved ones, Atlantans searched for ways to prevent thefts. The Southern World; Journal of Industry for the Farm, Home, and Workshop, a newspaper published in Atlanta, contained an advertisement for “Boyd’s Patent Burglar Proof, Self-Locking Grave Vault” on February 1, 1882. In addition, some requested that their loved ones guard their graves for several days after they died. Mrs. Gober made this request shortly before her death and burial at Thurman Cemetery, but her wishes were not honored.

The Atlanta City Council hired guards to protect the dead at Oakland. One prominent physician told the Atlanta Constitution reporter that he “would not enter Oakland Cemetery at night for ten thousand dollars.” The physician continued, “It is too risky. There are ten chances to one that the man who attempts to rob a grave in Oakland Cemetery will receive a load of buckshot for his trouble.” The physician also assured the reporter that Atlanta’s medical schools would “draw on other places” to get bodies for dissection (Atlanta Constitution, September 10, 1882).

Newspaper reports of grave robbing tapered off over the next few years, but the acts likely continued to occur. In the mid-1880s, Georgia lawmakers attempted to solve the problem. Inspired by the international solution of using unclaimed bodies for dissection, Mr. Ellis of Fulton County proposed a bill in the statehouse on September 24, 1885. According to the next day’s Atlanta Constitution, it “provoked a lengthy discussion.” One representative did not feel the state had the right to use an unclaimed body, and “it would make the state a resurrectionist for the benefit of the colleges.” Mr. Brandt, a Richmond County representative, responded that he felt the bill was “not violating the laws of humanity.” The bill ultimately received eighty-seven votes, one vote short of passing. Possibly referring to the bill, Henry County Weekly took a unique position, “While medical students are being harshly condemned for robbing graves, it is forgotten that the students intend to fill them up again when they go into practice” (October 2, 1885).

After the bill proposal, newspapers begin to carry more stories about ghouls. On October 8, 1885, a “miniature battle” took place at Westview Cemetery. Two guards at the cemetery, Ed Cason and Mr. Kenny, were fired upon by ghouls. One robber was shot, but they all escaped. The guards discovered the intended grave was more than a year old, meaning the body was too decomposed to be of any use. Two months after this event, the Atlanta Constitution reported robbers stole Mrs. William Rice’s body from Mason’s church on the Chattahoochee (December 3, 1885). Another article one month later recorded the theft of Israel Sanford’s body in Decatur. The perpetrator was identified as George Vaughn, who had also stolen William Johnson’s body in 1879 (see part 1). Vaughn was still working as the janitor at the Atlanta Medical College. He was sentenced to three months in jail and was forced to pay a fine of $1,000 or to serve the equivalent community service. Vaughn worked with the cemetery’s sexton, Joe Smith, to steal the body. When Smith died in 1887, he gave his body to the Atlanta Medical College for use in dissections. None of Atlanta’s medical schools wanted his body, and they paid for him to be buried in Westview.

In July 1887, the Georgia General Assembly passed a law granting unclaimed bodies to the state medical colleges. It was hoped that this bill, introduced by Representative Allen D. Candler of DeKalb County, would end the practice of grave robbing in Georgia. Despite this, it was the subject of debate in the statehouse two years later. Mr. Rankin of Gordon County proposed that the bill be repealed since the law by nature only applied to the poor (Atlanta Constitution, September 28, 1889). One representative asked if “the gentleman from Gordon is opposed to cemeteries,” which caused a great deal of amusement. The bill was not repealed.

Over the next few decades, there are only sporadic mentions of grave robbing in Atlanta’s newspapers, and the perpetrators were never after the bodies inside. They often hoped to recover valuable items inside the coffins. Thankfully, the practice of grave robbing has not plagued Oakland since the 1800s. The bodies of Atlanta’s former citizens rest peacefully.