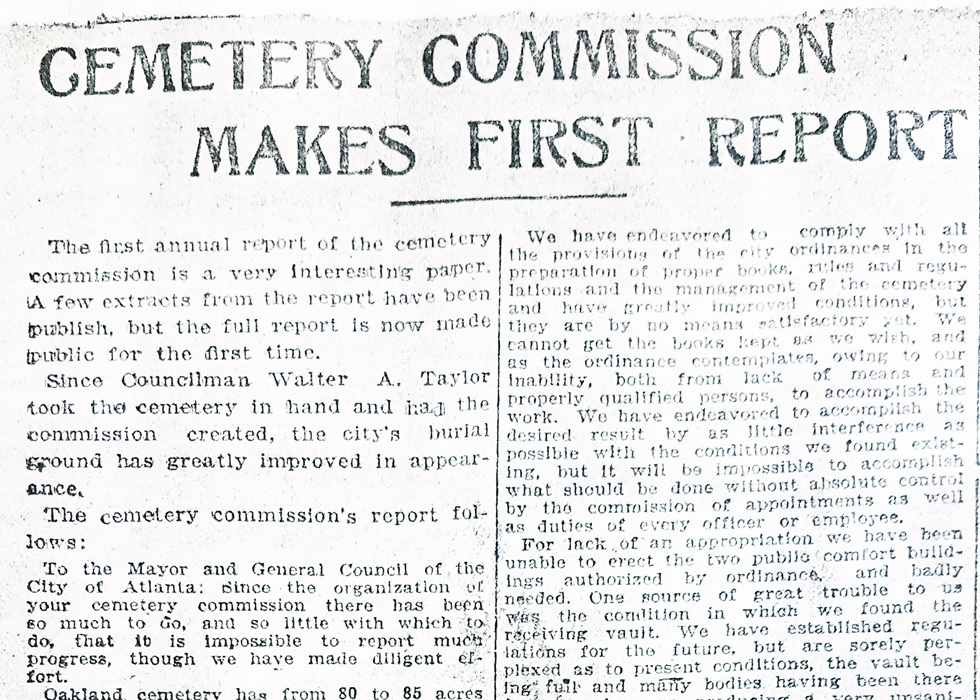 Thanks to the tremendous work of Historic Oakland Foundation volunteers, we are able to undertake the massive task of preserving Oakland Cemetery’s 150 years’ worth of archives. Cataloging, scanning, and storing these documents is a time-consuming and delicate task. Many of these historic records are stored in Oakland’s Bell Tower building as well as in the archives of the Atlanta History Center.

Here’s a tiny sampling of our archives. Below you’ll find an article published in The Atlanta Constitution on January 5, 1908 which summarizes the findings in the first Cemetery Commission report along with a more detailed annual report from 1910.

First established in 1908, Atlanta’s Cemetery Commission undertook the task of publishing an annual report summarizing the burials, construction, expenses, payroll, and other observations regarding the operation of Oakland Cemetery. The 1908 report notes that when the Commission was founded the cemetery was in “disreputable condition.” During its first year, the Commission oversaw repairs to the roof of the Bell Tower building (only nine years old at the time) and mentions that they had not been able to erect the women’s and men’s comfort stations because they did not have the needed $4,500. They were constructed later that year. Disturbingly, the report also notes that the receiving vault under the Bell Tower was full and that some of the bodies had been there for several years, “producing a very unsanitary condition.”

Click the images below to see the documents. Please note, there are some archaic derogatory terms used within these records.