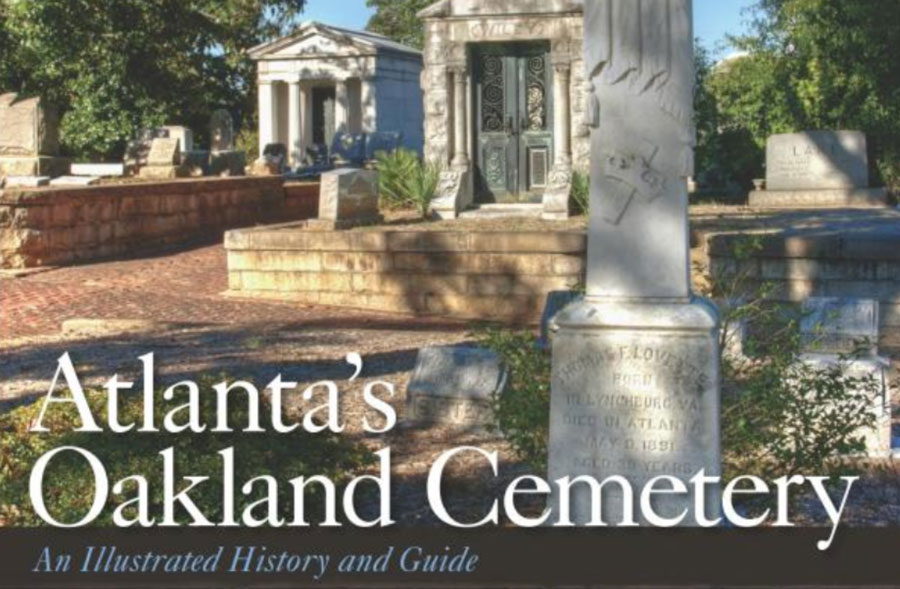 On September 30, we’ll celebrate history at our 40th annual Sunday in the Park festival. As part of the festival, this year we’re excited to feature an afternoon of book talks and book signings featuring local authors and their locally themed books. You’ll find them at the Visitor Center Porte Cochere the afternoon of the festival. All books will be available to purchase in the Oakland Visitor Center with a 20% discount during the event.

Here’s a preview of the books and authors featured at this year’s Sunday in the Park:

South-View: An African American City of the Dead by Dr. DL Henderson

Historic cemeteries like South-View are microcosms of society, and the lives and deaths of the people buried in South-View reflect the social history of Atlanta. The monuments and grave markers in the oldest part of the cemetery illustrate the influence of Victorian funerary art as well as African American vernacular memorial traditions. A variety of gravestone materials, from elaborate monuments of marble and granite to simple markers of concrete and brick, memorialize African Americans from all social strata.  South-View’s historic landscape includes the burial sites of many prominent African Americans who founded and developed Atlanta’s historic churches, businesses, and colleges.

In Atlanta and Environs, historian Franklin M. Garrett wrote that Oakland Cemetery is “Atlanta’s most tangible link between the past and the present.” Within its forty-eight acres are more than seventy thousand personal stories—of settlers and immigrants who forged a city from a rowdy railroad camp, former slaves who carved out lives in a segregated world, soldiers in blue and gray who were cut down in a brutal civil war, and civic and business visionaries who rebuilt the Phoenix City from the ashes of war and carried it to prominence on the international stage.

Today, Atlanta’s oldest public cemetery remains a must-see destination for anyone interested in the city’s colorful story. Past the grieving mien of the Lion of Atlanta, which guards nearly three thousand unknown Confederate soldiers, visitors can pay respect to those who made Atlanta history—former slave Carrie Steele Logan, who founded the first orphanage for African American children; Joseph Jacobs, owner of the pharmacy where Coca-Cola was first served as a fountain drink; Morris and Emanuel Rich, founders of the storied Rich’s Department Stores; golfing Grand Slam legend Bobby Jones; Gone With the Wind author Margaret Mitchell; Maynard Jackson, the city’s first African American mayor, and many others. Aside from its importance as a historic site, Oakland is among the nation’s finest examples of a rural garden cemetery, characteristic of the nineteenth-century movement to transform stark burial grounds into pastoral landscapes for both the repose of the dead and the enjoyment of the living.

With Ren and Helen Davis’s engaging narrative, rich photography, archival images, and detailed maps, Atlanta’s Oakland Cemetery is a versatile guide for touring the cemetery’s landscape of remembrance, as well as a unique way to explore Atlanta’s history.

Ren Davis is a native Atlantan whose travel writing and photography have appeared in such places as the Atlanta Journal-Constitution, Georgia Magazine, and Atlanta Magazine. Helen Davis taught for nearly thirty years in Atlanta public and private schools. The Davises are coauthors of several books including Georgia Walks and Atlanta Walks.

This book is a compelling exploration of what real life was like for residents of Civil War–era Atlanta.   In 1845, Atlanta was the last stop at the end of a railroad line, the home of just twelve families and three general stores. By the 1860s, it was a thriving Confederate city, second only to Richmond in importance.

A Changing Wind is the first history to explore the experiences of Atlanta’s civilians during the young city’s rapid growth, the devastation of the Civil War, and the Reconstruction era when Atlanta emerged as a “New South” city.   A Changing Wind vividly brings to life the stories of Atlanta’s diverse citizens—white and black, free and enslaved, well-to-do and everyday people. A rich and compelling account of residents’ changing loyalties to the Union and the Confederacy, the book highlights the unequal economic and social impacts of the war, General Sherman’s siege, and the stunning rebirth of the city in postwar years. The final chapter of the book focuses on Atlanta’s historical memory of the Civil War and how racial divisions have led to separate commemorations of the war’s meaning.

Dr. Wendy Hamand Venet is a history professor at Georgia State University. She is editor of Sam Richards’s Civil War Diary. She lives in Decatur, GA.

Atlanta Beer: A Heady History of Brewing in the Hub of the South by Ron Smith

From Atlanta’s first brewery in the 1850s to the city’s Saloon Row and the parched days of local and national Prohibition, the earliest days of Atlanta’s beer history are laced with scandal and excitement. Follow the journey of beer through Atlanta’s development, starting with colonial Georgia and the budding wilderness settlement of Terminus and eventually evolving into the ever-growing metropolis known as Atlanta.

An obsessive researcher, Ron is deeply interested in the history of beverage alcohol in the American South and its role in society. In addition to co-authoring Atlanta Beer: A Heady History of Brewing in the Hub of the South and Prohibition in Atlanta: Temperance, Tiger Kings & White Lightning, Ron has hosted beer and food pairing dinners and beer education sessions. He has been a featured speaker for the Georgia Center for the Book and presented at the AJC Decatur Book Festival and Georgia Literary Festival in 2015. Together with Mary Boyle, he developed the Malts and Vaults special topic tour at Atlanta’s Historic Oakland Cemetery.

Hello! Fat Crow! by Jason Flowers – For the whole family!!!

Hello! Fat Crow! tells the story of a little fat crow that ventures to an old forgotten cemetery to wake a skeleton named Mister Larry so that he may go and dig up his four brothers to get into mischief on Halloween night.
The story is told in the rhyming styles of Dr. Seuss with fun spooky illustrations done in the style of the old Disney’s Skeleton dance cartoon.